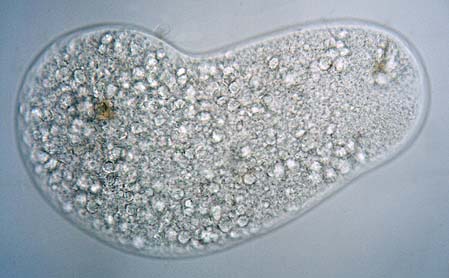 The Fire forced an evolutionary response

A Giant Amoeba is the pinnacle of evolution, representing the perfect organism. It looks like a brown and green mound of twitching blubber.

Giant Amoeba smash and crush anything in their way.

Area Smash (Ex): As a full-round action, a Giant Amoeba may forfeit its normal attack and instead choose to make a giant slam attack, affecting all smaller creatures in 40ft square. This attack automatically hits and deals slam damage to all within the square.

Extra-Terrain Qualities (Ex): Giant Amoeba are immune to the effects of oxygen. It cannot be further mutated by fire, but see below.

Physical Invulnerability (Ex): Giant Amoeba are immune to all physical, non-energy damage from any source; they just regenerate too quickly from such sources.

Split (Ex): If it kills creatures with a Hit Die total equal to its own Hit Dice, or when exposed to extreme fire effect (dealing 50 or more points of damage), Giant Amoeba begin to go through mitosis, splitting into two equally powerful beings after 3 full turns. During these 3 turns, it is one creature and can not attack opponents until it finishes splitting.

Explode (Ex): After being killed, a Giant Amoeba bursts into a horrible rain of slushy green and brown. While this has no effect outside of covering everything within 200 feet with slime, it smells horrible and can ruin anybody’s day.