This encounter serves as an introductory ambush into a larger dungeon, or a brief battle before a more stealth-heavy approach. Since excessive magic and easy access to flying can serve to trivialize the encounter, it fits better into a low-magic/low-rewards game. The encounter is easy to vary: just change up the creatures involved. Some suggestions include a construct or a Huge giant (to replace the stag beetle) and a monstrous spider or a mephit (to replace the gnomes).

The encounter is situated at the mouth of an aqueduct, which a gnome empire living in a mountain stronghold uses to channel the rainwater from the mountaintop harmlessly away, as well as to get rid of garbage. This is achieved with the help of a bloated stag beetle. There are also a few gnome sorcerers situated at the aqueduct, since it is a way into the heart of their realm. Here's some suggested ways to use the encounter:

Do you know that tiny chittering sound an insect makes as it scurries in the corners of a room? The beast before you makes a similar sound, only hundreds of times louder. Chitinous legs rub against an armored body the size of a small cottage; you notice that the carapace has been cleverly painted to blend into stone and shadow. The beetle's horn is almost as long as the creature itself, and you don't want a taste of it.

The gnomes of the stronghold keep a massive stag beetle as a garbage disposal unit: they dump their waste into an aqueduct poking out of the mountain's side, and the beetle eats what it wants and pushes out the rest. It also serves as a makeshift defense, since being dropped from this height is as effective as actually engaging foes in combat. The stag beetle is hiding in the shadows just inside the stronghold: it has been camouflaged with paint (+20 circumstance bonus to Hide while in the tunnel), and does understand to stay still, so a DC 21 Spot check is required to notice it.

Two grimly determined gnomes scurry along the thin banister that runs the length of the aqueduct. They're clearly guards: the little leather caps and official-looking tunics tell as much. But aren't guards usually armed and armored? When one of the gnomes gets close enough, you can hear the enigmatic mumbling, and it dawns on you. Magical soldiers.

Gnomes, as creatures small in stature but great in mind, often employ wizards and sorcerers as guards alongside more traditional melee soldiers. So too in this stronghold: the two guards at the aqueduct are sorcerers who've specialized into working with the giant stag beetle they have at their disposal. The gnomes hide in the tunnel with the beetle, and a DC 15 Spot check is required to notice them. 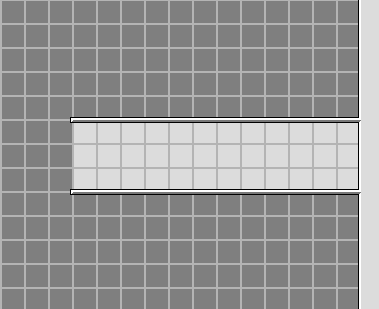 (on the ground) You leave the shadow of the trees and enter the shadow of the mountain. It's not the largest or most imposing mountain you've ever seen, but the knowledge of what it contains lends it some credibility. Out of the side pokes an aqueduct some 60 feet long. It's held up by stone pillars some 80 feet high, and it terminates into thin air: the land directly below has turned into a marshland, and refuse is littered in a big pile. A rope ladder dangles from the end of the aqueduct to the ground below.

(on the aqueduct) The aqueduct is exquisitely crafted, a fact somewhat diminished by it being stained with filth and streaked with garbage. Apparently it is used to get rid of both water and refuse. The aqueduct disappears into the mountainside, and the cavernous hole looks decidedly uninviting.

60ft.-by-15ft. aqueduct with a 5ft.-high and 12in.-wide banister running on each side. The far end has a 15ft.-tall and 15ft.-wide tunnel disappearing into the mountain. The distance to the ground is 80 feet. Approaching within 30 feet of the tunnel mouth will trigger the gnome's ambush, unless the characters are approaching by alternate means or manage to stay hidden.

The giant stag beetle is the powerhouse of the fight, and the gnomes know this: they serve a buffing role, trying to help the lumbering creature devastate enemies and push them off the aqueduct. If they notice approaching foes before they're on the aqueduct, they'll preemptively cast shield and resistance on themselves. In the fight itself, one starts by casting grease several times to make staying on the aqueduct that much harder, while the other pelts appropriate foes with scare. They both then move to color spray. The gnomes fight from behind the beetle, but if enemies try to climb onto the banisters, they clamber up and continue the battle there. The gnomes are adaptable and intelligent: play them as such.

The beetle, on the other hand, isn't. It moves in a direct line, pushing foes with charges ending in bull rush attempts (+20 modifier on the Strength check): the beetle can bull rush several foes at a time with a single check, owing to its massive size. Falling off the aqueduct deals 8d6 damage to a creature. Only if it becomes clear that the enemy can't be pushed back does the beetle resort to bite attacks. It has no strategies more intricate than this - it's a mindless bug, what did you expect?

Occasionally, a spellcaster will try to trivialize the combat with fly or the like. This is what the gnomes have their scrolls of dispel magic for. However, since they're only 4th-level sorcerers, they have to succeed on a DC 6 caster level check to use the scrolls. Note that there's nothing wrong in the encounter being easy: in fact, if it turns out to be trivial to your players, let them engage in the power fantasy of pushing puny gnomes off an aqueduct!

In addition to the two scrolls carried by the gnomes, they each have a purse with 50 gp. Furthermore, the giant beetle has eaten quite a few adventurers who wouldn't be pushed off the aqueduct. In its gizzard, a corpse-defilement-happy party can find a +1 flail, a hand of the mage, and a gorgeous golden amulet worth 600 gp, all only somewhat tarnished by gastric acid. Quite a bit of more mundane loot can be found in the ground beneath the aqueduct: rusted weaponry, rotten clothes, and a few coppers the gnomes missed.