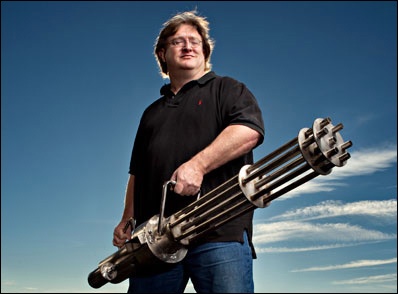 He is good. He is merciful.

Gaben appears as a large, jolly man with round glasses. He is the God of Product Distribution, and watches over all those mechants who need a better, faster way to get their goods to customers. A kindhearted deity, he provides good people with games to play, and refuses to allow evil people (namely pirates) to ruin his generosity for everyone else.

Gaben values sportsmanship and fair play. Wielding his mighty banhammer against those who would cheat or scream racial obscenities during battle, he believes that all of life is like a game, and all must display sportsmanlike conduct in everything that they do. Those that obey shall be rewarded with fast, efficient, and inexpensive product delivery. However, he has a deep-seated hatred for the number three. If you must do something three times in a row, then you have done something wrong, and you have incurred Gaben's wrath.

Merchants the world over give praise and thanks to Gaben for allowing them to provide quality product delivery.