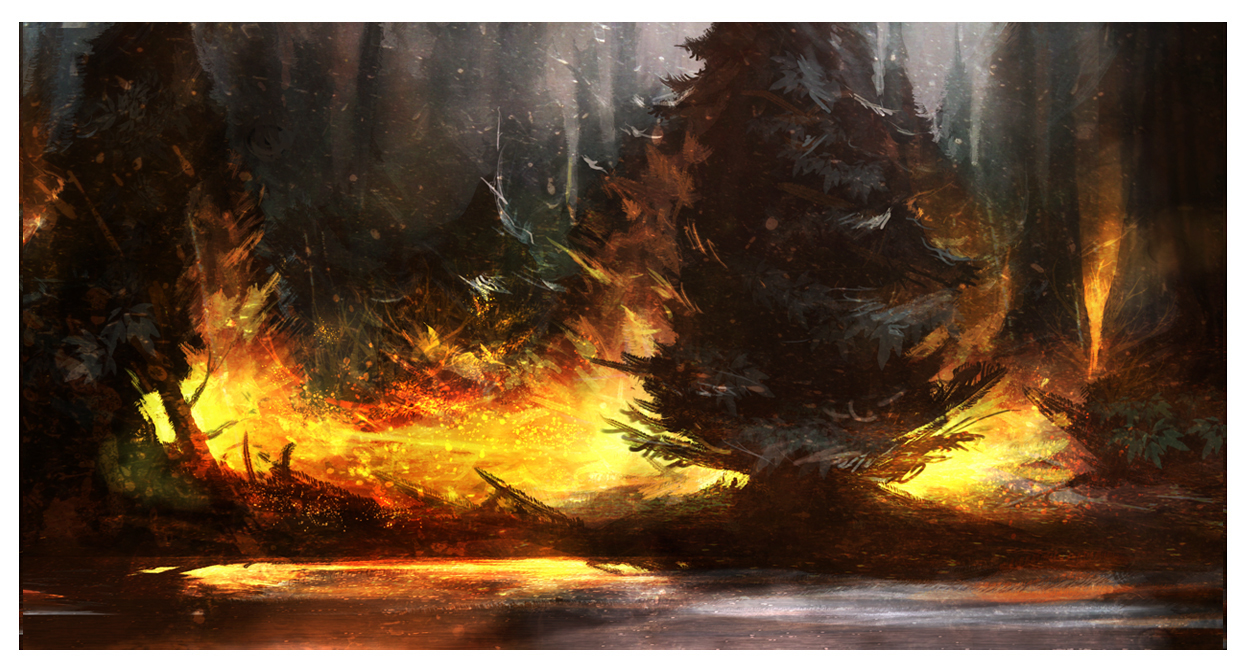 The devastation caused by a fyre fiend unleashed upon the surface world.

The air in the catacombs is hot and stifling, despite the time of year, and a sharp smell clogs the air. Then, you step around the corner, and there, inches from your nose, is the snout of an enormous boar-man, acrid, thick, black smoke rising from the corners of his mouth, and from the bronze and red flames that rise from his vast, hunched back. His pupiless eyes stare straight through you, and his massive, yellow tusks shine in the bronze flames from his back.

Fyre fiends are commonly mistaken for outsiders, seeing as they have such an odd anatomy, but are in fact mortal. The way their body actually works is mostly unknown, seeing as they only live deep underground and therefore haven't been effectively studied. Though it is known that they possess something that can be compared to intelligence. Fyre fiends are highly territorial, and will only live with another of it's kind if the other is of the opposite gender. After a fyre fiend litter has been born, the female will kill the male, who will have been trying to eat the children. A baby fyre fiend can easily be mistaken for a normal pig, seeing as their bodies appear similar to them in shape, and their flames do not ignite until one years of age, at which time the mother will leave them, and they will each go their seperate ways. Fyre fiends are only every found in natural caverns, and underground civilized areas connected to natural caverns.

A fyre fiends will attack anything on site if it comes within it's territory, usually merely attempting to drive the intruder away, though if initial attempts fail, they will not hesitate to kill. Fyre fiends are terrifying creatures, especially wherever they are angry, and this can help them immensely in combat

Breath Weapon (Su): A fyre fiend can breathe a 150 foot line of bronze fire that deals 18d10 points of fire damage as a standard action, once every 1d6 rounds. Anything caught in the line may attempt to make Reflex save (DC 25) for half damage.

Light Blindness: Abrupt exposure to bright light (such as sunlight or a daylight spell) blinds fyre fiends for 1 round. On subsequent rounds, they are dazzled as long as they remain in the affected area.

Natural Cunning (Ex): Although fyre fiends are not especially intelligent, they possess innate cunning and logical ability. This gives them immunity to maze spells, prevents them from ever becoming lost, and enables them to track enemies. Further, they are never caught flat-footed.

Skills: Fyre fiends have a +4 racial bonus on Intimidate, and Listen checks.