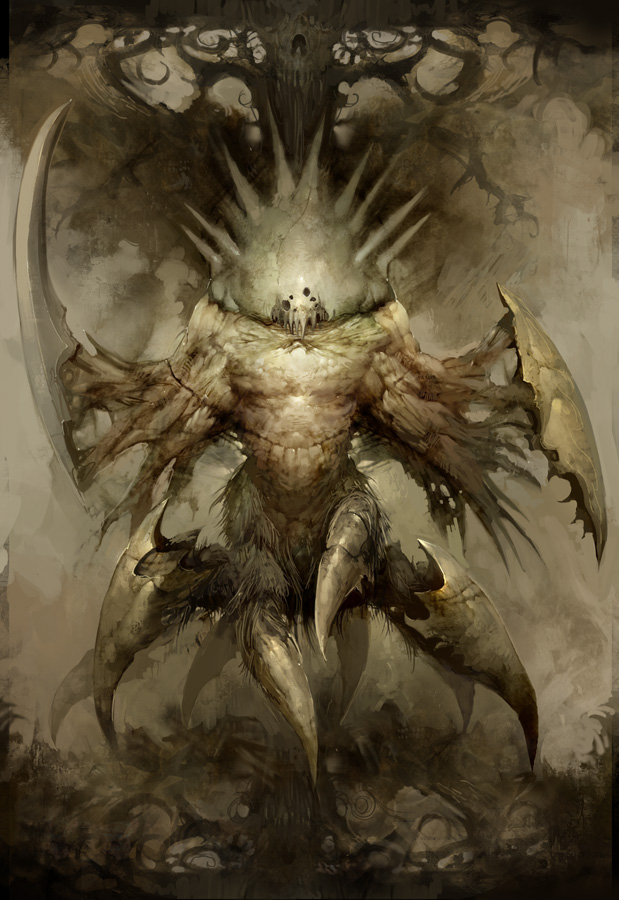 The ground there was soft and sticky, and the air was pungent and wreaked of decay. I could feel it coming, the subtle shifts in the air, the unnatural trembling in that red tinged soil. Though, despite the fact that I knew it was coming, I was not prepared to the sight of it, as it clawed it's way around the scored stone of that pit. It's body was a mass of nothing but toxins, decaying plant life, and infection. Though, before I had a chance to even recoil from the beast, it was charging, unleashing a primal, gurgling cry that made me regret ever taking that job.

Fungus beasts are very old, terrible, monsters whose bodies consist of decay ridden funguses and rot bloated sacs of toxin. Fungus beasts are not usually very aggressive beasts, electing to stay underground for thousands of years at a time, not moving, not doing anything other than growing. Though, when a fungus beast finds itself seeking to claw it's way out from underground, they become unsettlingly aggressive, often seeking out life to shred and devour without a second thought. The reason for this is believed that when a fungus beast comes up from underground, and finds itself severed from the roots that kept it alive, it must find another source of nutrition, and it finds it in living things.

If a fungus beast is seen above ground, then there is a distinct possibility that it will attack. In combat, fungus beasts are highly aggressive, electing to charge, headlong, into combat before they think of a strategy. This is the biggest advantage and the biggest weakness the have in a battle. They tend to be very easily struck in a battle, and can withstand very few spells. If a fungus beast feels that it may be about to loose a battle, they will choose to try and grab and opponent, and infect them with its fungal parasite ability.

Aura of Decay (Su): As a swift action, a fungus beast is capable of releasing a cloud of decaying spores and venom vapors in a 30 foot radius. Any opponent within the range of the cloud must make a Will save (DC 25) or become nauseated for 5d6 rounds. An opponent that succeeds on the saving throw is immune to the fungus beast's aura of decay for 24 hours. The save DC is Constitution based.

Fast Healing (Ex): A fungus beast regains hit points at an extraordinarally fast rate, regaining 15 hit point per round, as long as it has at least 1 hit point remaining.

Fungal Parasite (Ex): When a fungus beast begins its turn with a grappled opponent in its claws, it can attempt a special attack roll against that opponent. If this attack hits, the opponent takes 3d8+9 points of piercing damage plus poison, but must also make a seperate Fortitude save (DC 25) or become infected with a fungal parasite. A creature creature infected with a fungal parasite is unaffected by the parasite for 1 day, though, after that day has passed, the infected creature takes 4d8 bludgeoning damage every hour until it either dies, or a DC 25 heal check is made to remove the parasite. If a creature dies while infected by a fungal parasite, then it's body immediately begins being eaten by the parasite, making it impossible for it to be raised by raise dead or spells of similar power. A day after death, the creatures body will begin to be engulfed by rot and fungi that, after a week, will turn into a full grown fungus beast.

Improved Grab (Ex): To use this ability, a fungus beast must hit an opponent of at least large size or smaller with its claw attack. It can then attempt to start a grapple as a free action without provoking an attack of opportunity. If it wins the grapple check, it establishes a hold and can attempt to infect the opponent the following round.