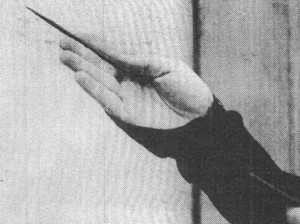 Fukibari are very thin, almost dagger-like needles usually around 2-3 inches long. Fukibari are often used with a blowgun, but are sometimes concealed in the mouth under the tongue or along the roof of the mouth and shot at an unsuspecting target at short range for a surprise attack. If used in this way treat the fukibari as a weapon requiring its own feat or taking appropriate penalties. If used in conjunction with poison, the rate of accidental self-poisoning increases by 5%; even if the user has the Poison Use feat or Class Feature, they risk poisoning themselves in this manner.

A fukibari used as a melee weapon is treated as a light improvised weapon (–4 penalty on attack rolls) and deals damage as a dagger of its size. Fukibari come in a wooden case that holds 10 fukibari. A fukibari that misses has a 50% chance of being destroyed or lost.

Prices and weights are for twenty fukibari.