A peaceful being that primarily lives on the ethereal plane as an onlooker to simply observe those on the material plane, but when not watching from the ethereal plane they spend their time guiding the lost out of the forests they prefer to inhabit, fairies have a personal interest in them due to their extraordinarily high spiritual power that they radiate. 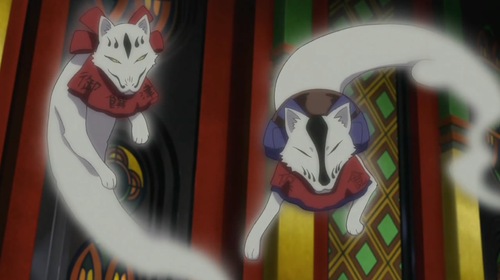 A Fox-Spirit is for all intents and purposes a fox that possesses multiple tails, these tails designate their power level 1 being the lowest and 9 being the highest. Fox-Spirits stand about 4-4.5ft. tall, and they weigh relatively in the 200 lbs range depending on personal height. Fox-Spirit males are generally larger than the females. The fur on a Fox-Spirit can be almost any color,yellow, white, blue, green, grey, silver, even gold, however wispy black, white, and even red lines of color cover the fur of these creatures almost like beautiful artwork. Fox-Spirits have the traditional long narrow snout. A Fox-Spirit’s eyes are typically a misty combination of silver blue and gold hues and can be almost any mixture of the three, Being considered a Kami themselves they are traditionally looked up to by the Fey and are not to be underestimated by any means.

Fox-Spirits are a very proud, yet social race. They treat all except those whom they consider destructive and ignorant (anyone that would think of destroying a forest for personal gain) if you respect it it will show you respect in return, if not it wont think twice about you or you're thoughts. If a Fox-Spirit catches you destroying a forest or harming the weak and defenseless you will receive no special treatment and it will deal with you accordingly (most likely death)

Fox-Spirits are traditionally neutral good and tend to stay out of matters that don't involve those it feels it must protect. Other wise a chaotic good is very probable.

Most Fox-Spirits live in the realms between the planes observeing from the ethereal plane and tend not to roam into major cities however there are several that take on the form of elves and humans and live among them in towns and cities.

Fox-Spirits are considered Kami by the Fey they Protect.

Fox-Spirits can speak to almost all Forms of Fey along with common, due to their spiritual nature they can also speak the languages of both angels and demons.

Fox-Spirits are usually given names by the Fey they protect.