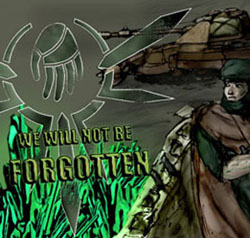 A common poster in Forgotten slums.

"The Forgotten” is, at best, a loose grouping of various mutants, generally isolated in various decrepit areas of the planet. They are linked not by uniform, race, or ideology—many at one time supported the Templar, while vast numbers once considered their best hopes to lie with the Brotherhood—but by status. Because all suffer from some level of Tiberium mutation, they find company only in those who are like them. Inherently mistrustful of the forces that be, who are sipping martinis and ordering men into battle from a bank of computers in some Blue Zone or dwelling in some ornate “Temple” in the desert, The Forgotten are unified by their desperation and their hate for those who have rendered them in such a state. In short, they are a people abandoned but not incapable, forgotten but not inept. They are a people with nothing to lose—a very dangerous people indeed.

When contact was restored with Leningrad in 1413, what remained was a people shattered by Tiberium mutation. Roughly 30% of the original population remained, and all but a handful were mutated. Having been abandoned for over a year, the mutants didn't trust outsiders from the beginning. When resources to provide aid to the survivors were cut by both the Templar and the Nod so that they may pursue more 'important' goals, the mutants bitterly resented the nonmutants. A large portion of the survivors demanded that they have sole command of Leningrad. When Emperor Lenin reluctantly refused, citing the city's importance to the Empire, the mutants united under a single leader, Saul of Leningrad, to revolt in 1414. While the revolt didn't succeed in capturing the city, it did show the world the Forgotten was a serious force.

The Forgotten believes that Tiberium ought to be left alone. It should be allowed to spread, since it is a part of the mutants' habitat now. To this end, mutants often raid Templar operations to slow the growth of Tiberium, in particular the operations near Rome, since mutants rarely have the money to eat nonmutated food.

The Forgotten is so loosely organized that any uniformity between two separate attacks is often just pure coincidence. While this is an overstatement, its not far from the truth. Forgotten soldiers use any weapon they can get, and are often uncoordinated in their attacks. However, they are capable of overwhelming enemy fortifications, and often surprise their enemies, since mutants preparing for attack are hard to distinguish between people just living their lives.

While they don't have the experts of Black Mesa or Cambridge, nor do they have the Tacitus, the mutants are ingenious in terms of ballistics. They were the first to develop rockets, and the first to create automatic weapons. However, much of the technology of the mutants is scavenged from outdated Templar and Nod research, leaving them somewhat behind in the technology race. The mutants make use of every bit of technology they can get, though, and often use devices in ways the inventors never thought of. Furthermore, they make much greater use of Tiberium weapons, sometimes wielding even Tiberium shards into battle.

Mutant leadership is loose, to say the least. Every Forgotten community has its own command structure. However, most mutants acknowledge Saul as their leader, though few ever meet him. During rebellions and other large operations, Saul often chooses a commander to lead multiple communities in the maneuver.