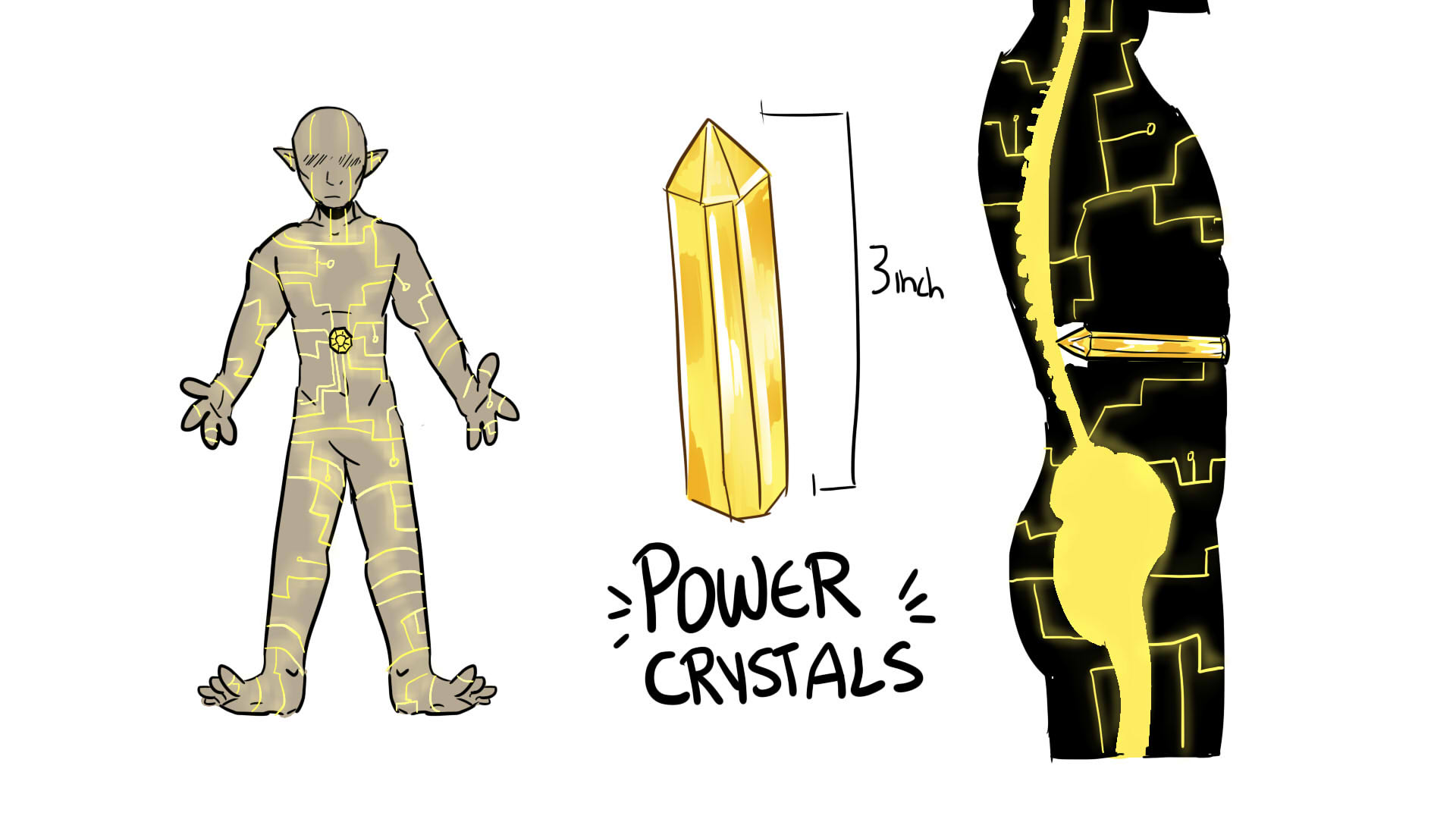 Note: This is the official race from the Fool's Gold Campaign, as told by DingoDoodles, and created by Felix Irnich. The adaptation for 5e can be found HERE

Foreclaimers are an ancient race of elves which disappeared over 2,500 years ago. They were solely focused on the advancement of their technology and physiology. Most of their science is based on the power harvested from the sun, which they use to power machines and enhance their own bodies. The energy they harvested from the sun was stored in large power crystals, basically batteries, which were then used as parts of machines. It is unknown how they acquired such advanced technology, or how the crystals were used to enhance their lifespans, or why they went extinct. Foreclaimers did not posses the concept of empathy, or many emotions in general (Read more details below). However, contrary to their lack of empathy, they were a society without currency or trade. Each member had assigned duties from their current elected leader (usually the head scientist), which contributed to the progression of their society.

Foreclaimers are extremely efficient and focused on their work. Their goal is advancing their civilization by advancing technology and biology, using energy harvested from the sun. Distractions or interruptions are not tolerated and removed quickly. Foreclaimers do not possess the concept of empathy, or artistic creativity. To them, these are inefficient social constructs that do not belong in their society. If a member of society is crippled, disabled, or injured beyond simple care, they are left to die and disposed of unceremoniously. They don't grieve losses and don't hold funerals, as those emotions are merely a distraction from their important work.

When powered: Foreclaimers were originally elves that have enhanced and augmented themselves using their sun-based technology. They are on average 6'6" tall with perfect physique. Their skin is mostly grey, with golden glowing lines throughout reminiscent of circuitry. A 3" long power crystal of various colors sits above where their navel would be. These crystals are the source of their enhanced power and golden glowing lines. It can be freely removed from its socket.

Unpowered: When a Foreclaimer's power crystal is removed from its socket, they lose all racial bonuses to skills and ability scores (not including penalties), as well as their Spell-Like Ability. Their lines also disappear. If left unpowered for more than a year, they will slowly begin to degrade over 100 years, eventually reducing their lifespan by half.

When a Foreclaimer reaches adulthood, they are put through a medical procedure where the socket for the power crystal is surgically inserted, and then powered up. They also receive one physical augmentation of their choice, typically based on their profession to assist them in being as efficient as possible.

Foreclaimers tend to themselves and do not get along with any other races, reinforced by the fact that they lack the concept of empathy. They may establish a relationship with members of another race if it furthers their goals, but more likely they will simply destroy them through highly efficient warfare instead.

Foreclaimers are always Neutral, even though other races may perceive them differently.

Foreclaimers establish huge cities where the lands support their goals through either resources or tactical location. Most of their society is located in a single city in the jungle, as that's most efficient, with only a few outposts for exploration.

Foreclaimers do not believe in deities, nor follow any established religions. They only care about their work and facts.

Foreclaimers mostly speak Elven, but are versed in Common should they need to interact with other races.