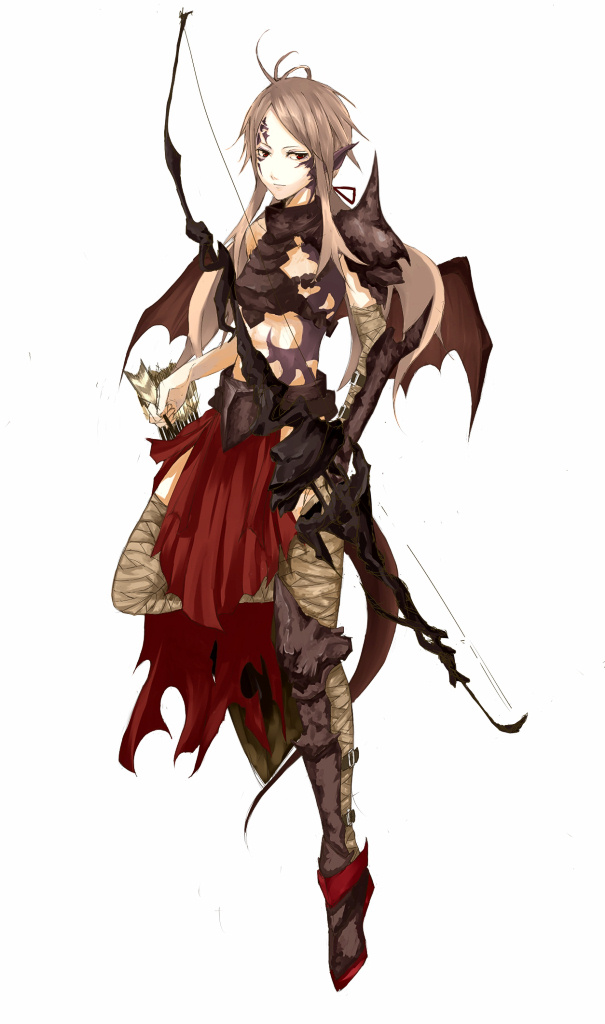 It's not the size that counts, it's how you use them!

The flying archer explains themselves in their title: they are an archer that flies. In flight, they gain many advantages that fellow marksmen can only dream of, not the least of which is the ultimate vantage point. However, how the archer got their ability to fly is always a tale worthy of note. A common story would be that a powerful winged being such as a Dragon or Phoenix, or a God/Goddess that have the Air Domain, gave them a blessing which allowed them to go beyond the archery ability of their past, and after receiving the blessing, the fledgling must earn their keep. This is achieved by a free fall of 2500 feet. You must have the blessing, and jump of your own free will, where they must put their faith in the vague blessing of this powerful being of the air. They know should they meet the earth, they will definitely die. Once they have fallen 2500 feet, they sprout wings that are a physical embodiment of their free spirit, and gain their powers of flight. In exchange, as a ranger has their preferred prey, the realized Flying Archer adds the natural enemy of the giver of their blessing to their preferred marks, becoming a disciple of that being.

Flying archers are people who have gotten a blessing from a powerful being capable of flight, and have underwent the free-fall ritual. They gain heightened ability to strike down their favored enemies, as well as magic arrows, in addition to the obvious result of the ritual: flight.

To qualify to become a flying archer, a character must fulfill all the following criteria.

All the following are the class features of the flying archer prestige class.

Fly (Ex): At 1st level, the flying archer gains wings that grant him a fly speed equal to his base speed with average maneuverability (if the character already has a previously existing fly speed that is superior to this value, use that speed and maneuverability instead). This speed increases by 10 feet every two levels thereafter, and the character’s maneuverability increases at the same rate (by one step every two levels) to a maximum of perfect. Any character who wishes to wear armor must first have it adjusted.

Double Shot (Ex): A number of times each day equal to your dexterity modifier, the flying archer may loose two arrows to strike at a single target as a full round action. The arrows are settled as separate attack rolls at the same bonus.

Flyby Attack: By fourth level, a flying archer has become accustomed to the wings on his back. He gains Flyby Attack as a bonus feat, allowing him to take a move action and another standard action during any point in the move.

Triple Shot (Ex): At 6th level, the flying archer may add a third arrow to the barrage from his double shot ability. In addition, only using double shot rather than triple shot is treated as a single attack rather than a full round action.

Death From Above (Ex): In lieu of his regular attacks, once per day a flying archer of 8th level or higher can loose an arrow at each and every target within range, to a maximum of the flying archer's Dexterity modifier. Each attack uses the archer’s primary attack bonus, and each enemy may only be targeted by a single arrow. Despite the implications of its name, this ability can be executed when the flying archer is grounded as well as in flight. Each arrow fired can benefit from Enchant Arrow.

Innate Ammunition (Ex): A flying archer can shoot their bow despite having no arrows, creating a translucent arrow which has an appearance that depends on the entity who provided the blessing required to become a flying archer. This arrow deals normal damage for the weapon used, but the damage type is changed to that of the energy type of the being that provided their blessing (if any). If no energy type is applicable, it may benefit from one enchantment from Enchant Arrow.

Tetra Shot (Ex): At 10th level, the flying archer may add a fourth arrow to the barrage from his double shot ability. In addition, using just Triple Shot is treated as a single attack rather than a full round action. In addition, all arrows fired by Tetra Shot or any of the prior iterations may benefit from Enchant Arrow, but they must all benefit from the same one.

Dragon You have gained the favor of a Dragon. As its disciple, your Innate Ammunition deals the same energy damage as the specific dragon's breath weapon (for example, fire for a red dragon, cold for a silver), and your Smite Favored Enemy (as seen on the Table) works as a Paladin's smite, with the difference being this also deals the energy damage of the specific Dragon's breath weapon vs that Dragon's natural enemy (for example, silver dragons are natural enemies with red dragons and vice versa).

Deity You have gained the favor of a Deity that has the Air Domain. You need not worship them, but in them giving you this blessing, you become natural enemies with the enemies of this Deity. (For example, if you receive the blessing from Aerdrie Faenya, an Elven goddess, you will find yourself naturally at odds with Drow, and Drow will be your Flying Archer Favored Enemy). If this deity has a favored weapon that deals energy damage, you may use this as the energy type for your Innate Ammunition. Otherwise, you gain double your normal Favored Enemy bonus towards this particular enemy

Other Consult with your DM what you are looking to gain the blessing from, and decide upon your Flying Archer Favored Enemy, and what bonuses you may gain for your Innate Ammunition, if any would be apparent to add.

Combat: A flying archer is terrific long-range support character. While in flight, he is usually out of reach, and his double shot ability gives him a potent offensive weapon as well. On the ground, he is marginally less effective, losing a great deal of his potency and essentially becoming just another archer.

Advancement: Rangers make the most effective flying archers with their natural affinity for archery and limited selection of divine spellcasting. Due to their bonus feats and high base attack bonus, fighters can become flying archers rather quickly and gain a valuable asset in the ability to fly. In addition, for the purposes of advancement detailed in Swift Hunter [6], treat all levels of Flying Archer as Ranger or Scout, but not both. If you have this feat prior to taking Flying Archer levels, you may add additional Favored Enemies at the appropriate levels.

Resources: Flying archers are loners; no organization exists to keep contact between them. But since most of them are rangers, they often keep their own networks of contacts amongst the many avian species of the world.

Flying Archers in the World[edit]

NPC Reactions: NPC reactions toward flying archers vary depending on the character. If they are a helpful ranger, then they will usually receive the respect they are due. If they are bloodthirsty, then reaction will likely be a bit more negative. Many are more self-conscious than their reputation warrants, however, and will attempt to hide the wings under heavy cloaks. This usually makes them appear to be hunchbacked, even if is an unintended effect.

Characters with ranks in Knowledge (local) can research flying archers to learn more about them. When a character makes a skill check, read or paraphrase the following, including information from lower DCs.

Flying Archers in the Game[edit]

As outlined above, flying archers are best employed as scouts for a larger fighting force.

Adaptation: Nothing about the flying archer is campaign-specific, so adaptation is a snap.