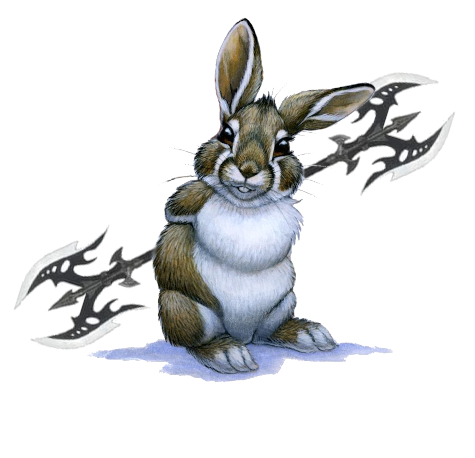 Description. Fluffy Bunny was created by the God of Mischievous Tricks as a interesting cruel joke to all evil kind because lets faceit who would let you live it down as being known as the demon that was slain by a weapon that was called The Fluffy Bunny. You have a +2 bonus to attack and damage rolls with this magic double axe of holy smite. Holy Smite The spell deals 3d8+con to each evil alignment creature or 5d8+con to an evil outsider and causes it to become blinded for 1 round. A successful Will saving throw reduces damage to half and negates the blinded effect. The spell deals only half damage to creatures who are not evil aligned, and they are not blinded. Such a creature can reduce that damage by half down to one-quarter of the roll with a successful Will save. DC 10+ Characters Fortitude

Disclaimer A fluffy bunny is NOT included with the purchase of an axe, Thank you for shopping please come again.

notice No fluffy bunnies were harmed in the forging or enchantment of this weapon. }} Back to Main Page → Pathfinder Homebrew → Equipment → Weapons