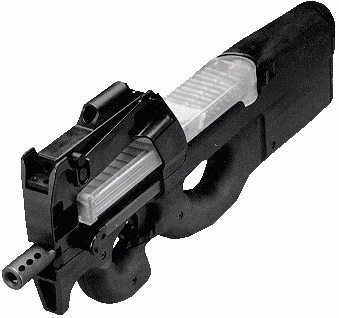 A gnomish device, the flak repeater is a boxy gun shaped weapon with a trigger, loading mechanism, and "flak", shredded bits of hard metal, ball bearings, and other dangerous implements. For this reason the ammunition is treated as both piercing and slashing damage. The box contains a large amount of sealed gunpowder or other fuel. When the trigger is pulled, gears move a package of flak into place, and release a portion of explosive behind it, detonating immediately and sending the spinning package to its enemy. Because of the unaerodynamic shape of the shot, the range is pitifully short and inaccurate for a ranged weapon.

The device which controls the loading and firing is very smooth and swift, the weapon can be turned to a 'rapid fire mode' with a flick of the thumb. In this mode when you make a full attack, you gain an extra attack at your highest bonus with your flak repeater, but all attacks take -2 to hit from shaking. If you are fighting with two flak repeaters, you can gain an extra attack from each flak repeater, but the penalties stack for -4 to hit and you still take normal penalties for fighting with two weapons. You cannot reload a flak repeater without a free hand.

The flak repeater ammo comes in clips of 15 shots. Reloading a flak repeater is a full round action which provokes attacks of opportunity.

If someone without the appropriate exotic weapon proficiency feat attempts to use a flak repeater, on a natural 1 they have a 25% chance of creating an internal explosion from too much explosive being put into the weapon. It deals 2d4 damage to the weapon, bypassing hardness. If this is enough to destroy the weapon, the user takes the additional damage as slashing, piercing, and fire damage.