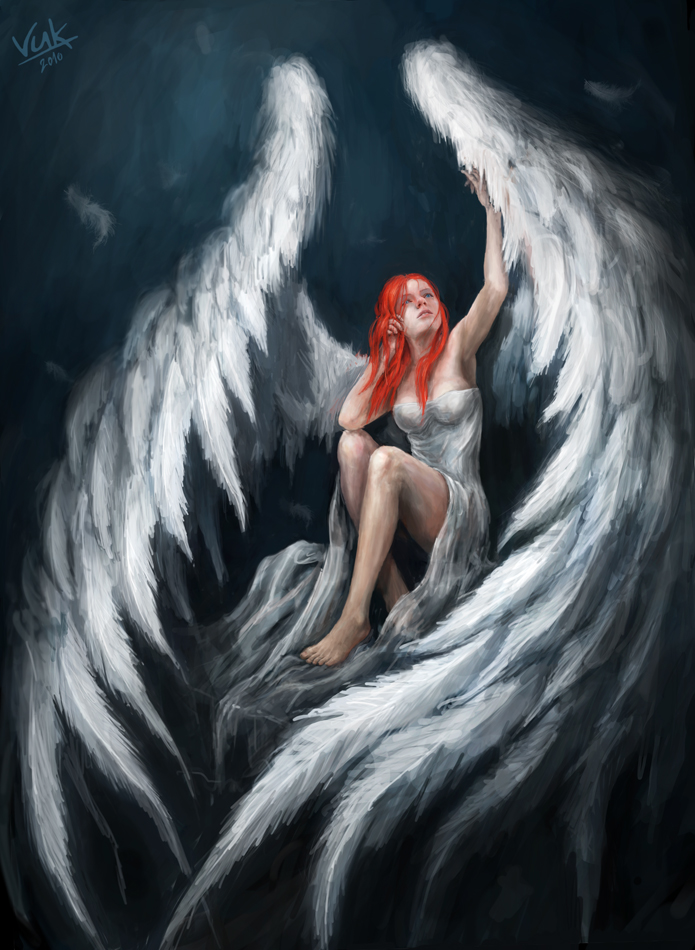 Characterised by an aloofness and disdain for all but other members of their race, these beings can be found serving the greatest of Deitys and Demons though most disdain servitude all together following only their own goals and ideals. They claim to have been created before all other celestials, acting as a template upon which the 'lesser' Angels are based. They are extremely varied in ideals and opinions. The few traits they tend to share are a burning ambition and disgust for those who remain wilfully ignorant.

Generally, Angels tend to be fair-skinned, winged humanoids. They are often far taller than humans, with even the shortest being able to stare the tallest man in the eye though this height belies their incredible lightness, seeming to weigh almost nothing. Their perfectionist and elitist attitude is often reflected in their appearance, seeming to condescend those around them with their looks alone. Most races would consider them beautiful at worst and God-like at best, though this of course depends on the beholder. They have bright, plumed and often perfectly groomed white feathered wings. Chromatic differences in hair, skin and eyes are more diverse than any other race with many having such colours as blonde, pink and gold to name a few. Near-White skin, blonde hair and golden eyes are however, typical of most. First Angels are unique among their kind as there wings are of variable length, should they wish a First Angel can extend their wings to a minimum of 1.5 times the span of their arms in order to fly or can extend them to up to 4 times the span of their arms. This increases their size in all directions causing them to rest just above the ground. Though all wings are white in colour this can vary from a perfect alabaster, all the way to a dusty grey.

Lawful/Chaotic Neutral, though they have no care for the morality of good and evil most wish to enforce order upon others. Some however, simply don't care about the needs of any but themselves believing all other races to be beneath them.

There disdain for all other authority extends even to the divine, very few will even acknowledge the teachings of Deitys as anymore then lies to control the sheep who worship them. Most see themselves as equal if not superior to Gods and their servants claiming to have existed long before they drew breath.

Common, Celestial, Primordial and one bonus.