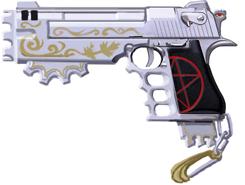 The Firestar Protector is appropriate for characters in the Paragon tier and upward. The Gun functions as a Pistol.

Goals of The Firestar Protector[edit]

The Firestar Protector is an item brought back from the future, its powers are rather strange, It will not inform you of its mistrust, or of its admiration, However it might jam often, or fail to fire if displeased with its owner. The Protection Seal around its handle might burn with radiant heat in an attempt to cause pain to the wielder. However no actual communication is posted between them. If happy it will function without fault, To the point where it will provide added effects allowing its owner to perform more powerful attacks.

The Gun will appear strange to anyone who might find it, such a weapon after all has yet to be seen by this world. Upon picking it up and attempting to use it they will soon discover what it does and doesn't like. For a gun that doesn't speak it often shows how it feels towards actions. Possibly Firing itself off when its owner or their ally is committing an act it disagrees with.

"My Trigger is an Extension of your fist."
Overjoyed at the idea of the two following a similar objective, and defeating the darkness of this world, he seems to give himself fully to the owner, Trusting them completely.

"Together we are an army"
The Gun understands that its owner is fighting off demons, and monsters of an evil nature. Why it is unsure, but it wants to help its owner achieve their goals, so long as the path they walk leads in the same direction.

"We Follow a Similar Path"
The Gun is aware that the enemies that its owner fights, is the same as those it wishes to fight, but is unsure if this is coincidental, or if it is their ambition.

"You May Have something inside of you, but i can't see it"
The Gun doesn't trust its owner to any extent, and limits itself off from them. Reducing its abilities able to be used, and cutting back its firing ability to see if this person is really worthy of such an item.

"Prove Yourself"
The Gun is unamused by the antics of its owner and wishes to leave, for some reason it has chosen to stick around and see what may come of this relationship, but it will not do so nicely... This is a test the gun will no longer function as a gun, and instead wishes to see if the owner will give up on the weapon and toss it aside, or use it as a blunt object and fight along side it in battle.

"I Won't Help you Anymore"
When the gun doesn't wish to be with the same wielder any longer due to it being unimpressed or angered it will ignite with a radiant heat that will cause 1d10 dmg to anyone who tries to touch it. Before moving on with an explosion. If it chooses to leave on good terms it will erode into 10,000gp worth of gold dust able to be used to increase an item's magical ability.