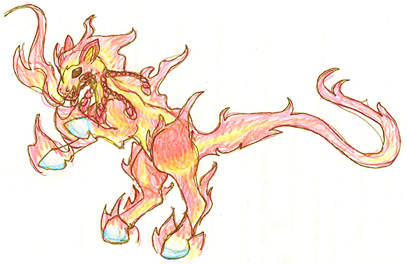 You've noticed that the dungeon's temperature has risen considerably in the last minute or so. As you enter what appears to be a canal for the city's sewers, the water rapidly begins to evaporate, creating a dense fog. Suddenly, a small, fiery comet shoots by over your head and slams into ground, creating an explosion. When the smoke clears, you see a fearsome looking horse, with six snake-like braids coming off of its neck. You wouldn't be so concerned, however, if it weren't for the fact that said horse appears to be made entirely out of fire. The creature is so hot that the very air about it has turned to steam, and your pitiful attempts to clear your eyes do you no good. Its smouldering, coal-like eyes turn towards you, and it snorts furiously, rearing up on its hind legs and belowing like some primordial god of fire...

Firemanes are the descendants of a nightmare that became trapped on the Elemental Plane of Fire eons ago. Unlike regular nightmares, firemanes are fire given physical form, which makes them all the more dangerous. Firemanes can transform into a small, meteoresque form which allows them to traverse the planes. A Firemane is a powerful adversary, the heat which it gives off being great enough to melt steel after a few minutes. A Firemane is about the size of a light war horse. Firemanes can speak Ignan, Infernal and Abyssal, but rarely do so.

In combat a Firemane will lash out with its hooves and bite at pinned foes with its white-hot teeth. It will also use its body-heat and powerful fire-based abilities to weaken and discourage the opposition, should it prove to be outnumbered. A Firemane's natural weapons are treated as evil-aligned for the purpose of overcoming damage reduction.

Astral Projection (Su): This ability functions just like the spell of the same name (caster level 20th); a firemane can use it at will.

Burning Body (Su): Any combustible materials which come into contact with any part of the Firemane's body will be set ablaze.

Bushfire (Su): a firemane's most devastating attack. It superheats itself to about 10,000 degrees Celsius, causing the very air to combust in a fiery explosion. This attack deals 10d10 points of fire damage and is not subject to damage reduction. Bushfire has a radius of 15 feet. Anyone caught within the explosion must also make a DC 25 Fortitude save or be set ablaze for 1d4 rounds. a firemane is only able to use this attack once every 30 minutes, and it acts as a full-round action.

Displacement (Su): Displacement is a unique ability which allows a firemane to shunt itself out of space and time, effectively performing a short-range teleport. A firemane can Displace itself to any spot within a radius of 50 feet without provoking an attack of oportunity, so long as it is not occupied by a creature. A firemane can use this ability in lieu of its move action if it is surrounded or wishes to make a surprise attack.

Etherealness (Su): This ability functions just like the spell of the same name (caster level 20th); a firemane can use it at will.

Fiery Aura (Su): The heat which a firemane gives off is so great that it can melt steel. At the start of every round after the beginning of the battle, all items made of steel must make a Fortitude save of 10 or else be melted into a puddle of slag. Anyone who touches this slag will take 20 points of unblockable damage and will lose 1 point of Constitution for 2 minutes. The aura has a radius of 20 feet.

Smoke (Su): During the excitement of a battle, a firemane snorts and neighs with rage. This snorting fills a 15-foot cone with extremely hot, sulfurous smoke which chokes and blinds opponents, dealing moderate fire damage in the process. Anyone in the cone must make a DC 19 Fortitude save or take a -2 penalty on all attack and damage rolls until 1d6 minutes after leaving the cone. Even with a successful save, anyone in the cone still takes 1d4 points of fire damage. The cone lasts for one round, and the firemane uses it once as a free action during its turn each round. The save DC is Constitution-based. Because of the smoke created by the evaporating moisture in the air, a firemane has concealment against creatures 5 feet away and total concealment againt creatures 10 feet or farther away. This steam, and the smoke, does not obscure the firemane's vision in the slightest.