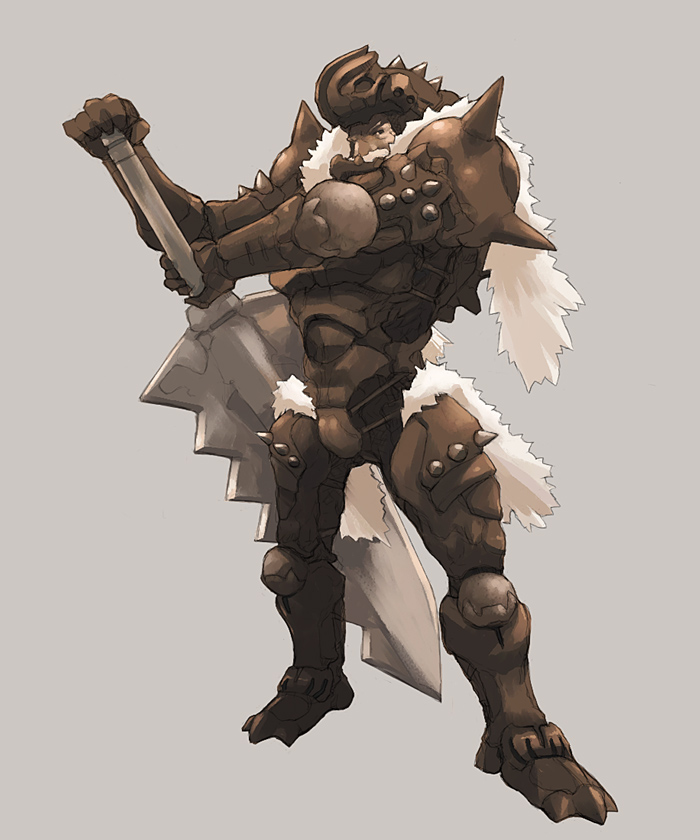 Fell Knights are disillusioned in the world, believing not in good or justice, but in strength. They are devoted towards serving a particular lord or regent that their patron deity has evoked his support for, but never through loyalty alone. They wield terrible powers, granted by their God, and use them to smite their enemies, as well as inspire fear. While a Knight may be skilled in any weaponry, they can only use their deity's favored weapon to call down their powers.

A Fell Knight absolutely must have a deity, or they have no power.

Fell Knights are direct servants of their gods, and answer to no higher power than the gods, themselves; Asking a Fell Knight who he serves, however, often yields a different answer: Himself. This means that unlike most other divine and knight classes, they are not held to any code of conduct besides what their deity prohibits. On the opposite side, their powers are distributed more in their Fell Sword abilities, rather than any divine spell-casting. Their relationships with others, even other servants of their deities, are often maintained through fear and power.

Generally, Strength and Dexterity are good attributes for a Fell Knight to have, as with any Warrior. Wisdom and Constitution are also important, as Wisdom affects some skills and abilities important to them, and Constitution allows them to last longer.

Fell Knight's wield a special power, of Divine origin. Their abilities are entirely dependent on their relationship with their patron deity. All of the following are class features of the Holy Knight.

Prayer (Ex): Fell Knights are able to communicate with their patron deity, often when they need to decide on what to do in order to best serve them. This ability functions as the Commune spell, and is usable at will.

Fell Sword Techniques: The Fell Knight employs abilities of divine power, often dealing high damage and weakening enemies, while strengthening themselves: A warrior's dream. The Fell Knight may use any of the currently available techniques up to his Wisdom Modifier + 3 times per day. All damage done by the following abilities is considered to be profane damage. Furthermore, all techniques are only usable if the Fell Knight is using his deity's favored weapon. Each attack has a different range and effect. Finally, all attacks must succeed an attack roll against the target's touch armor class.

ShadowBlade (Ex): By swinging your weapon, and shouting "Master of all swords, cut their energy! Shadowblade!", you summon a hellish phantom sword to strike from the underworld, erupting beneath your foe. The attack does 2d8 profane damage, and an additional amount of damage equal to your Fell Knight level, and transfers half the damage done to your hit points. This damage applies to your target, only. This attack can only be used on targets at 15 feet of range, or shorter.

Duskblade (Ex): By swinging your weapon, and shouting "Dead or Alive, the dark sword slashes magical powers! Duskblade!", you can rain down phantoms of bloody daggers upon your target, dealing 1d8 damage, and an additional amount of damage equal to your Fell Knight level; If the target is damaged, the target begins losing spells per day. Your opponent loses a single spell per day (As if the spell had been used up); The maximum level of affected spells per day is equal to your Fell Knight level, and the spell slot drained will always be of the highest available to the target (For example, a level 5 Fell Knight uses Duskblade on a Level 17 Sorcerer. The Sorcerer has access to 8th level spells, and has 6 slots for his 5th spells. Since he is 5th level, he can only drain the 5th and lower level spell slots, and starts as high as he can: Effectively reducing the amount of 5th level spells the Sorcerer can use to 5 slots, instead, for the rest of the day) . This attack applies to your target, only. This attack can only be used on targets at 15 feet of range, or shorter.

Harrowing Slice (Ex): By swinging your weapon, and shouting "Unholy forces, damn those who stand against you... Vengeance! Harrowing Slice!", your weapon begins to take on a dark hue, glowing with evil taint. You make a single melee attack, rolling with your highest Base Attack Bonus. If you succeed the attack, you must roll a d% with DC equal to 10 + Your Fell Knight Level + WIS Modifier. If this succeeds, the hit is automatically considered a critical hit, and confirmed. If it fails, the attack proceeds as a normal attack. This damage applies to your target, only. This attack can only be used on targets in melee range.

Doomsayer's slash (Ex): By swinging your weapon, and shouting "Discard the guise of feints and be vanquished! Doomsayer's Slash!", your attack is almost guaranteed to strike. This attack deals 2d4 profane damage, and an additional amount of damage equal to your Holy Knight level. This attack applies to your target, only. This attack is treated as if under the effects of the True Strike spell, with your Fell Knight level as your caster level. This attack can only be used against targets within Melee range.

Disastrous Sweep (Ex): By swinging your weapon, and shouting "With pride and power, the evil sword cuts all threads... Crush! Disastrous Sweep!", you can cause a blast of profane energies hurtling at a range of opponents. This attack is effectively a Breath Weapon in the form of a 30 foot cone, doing 4d10 Profane damage to any living creature, friend or foe, caught in the line, plus an additional amount of damage equal to your Fell Knight level. This attack applies to any creature caught in the area of effect. You do not need to target any particular opponent to use this ability, but the cone is always 30 feet in one direction. Anyone taking damage may reflex save for half damage.

Bonus Feat: At every other level, beginning at 2nd, Fell Knights may take a single bonus feat from the Fighter's Bonus Feat list.

The Ends Justify the Means: Fell Knights are recognized by their deity as one of the greatest creatures of havoc and raw strength in existence, as well as a very powerful force of their will. All fell sword techniques become more powerful, symbolizing the approval of the god. All damage die for Fell Sword Techniques are increased by one. (2d8 -> 2d10, 1d4 -> 1d6)

If a Fell Knight renounces his patron deity, or is rejected by his deity for acting against its whims, he loses all class features of the Fell Knight class, as well as the ability to take any more levels in the class. This cannot be undone by the Atonement spell. It can only be reversed by the whim of the Deity or by finding another deity who might receive your service.

Fell Knights in the World[edit]

Fell Knights care for not but their own desires. To this end, they manage the slightest of considerations for the whims of their deities, simply because they build upon their power. Sometimes, however, the truly most devoted of evil may become Fell Knights, and seek to further their lords conquests, currying favor and attracting both the fear and hatred of their supposed compatriots.

NPC Reactions: All beings fear the Fell Knight. If not fear, they hate, or at the very least, respect them for their awesome power. Most creatures wise of them would stay away, fleeing the region if rumors of Fell Knight were to be heard nearby. Some might seek to challenge them, however, being rather worthy opponents. Still some places might find favorable places for Fell Knights to linger, such as areas of evil and other similarly aligned, but strong, beings.

Characters with ranks in Knowledge(Religion) can research Fell Knights to learn more about them. When a character makes a skill check, read or paraphrase the following, including information from lower DCs.