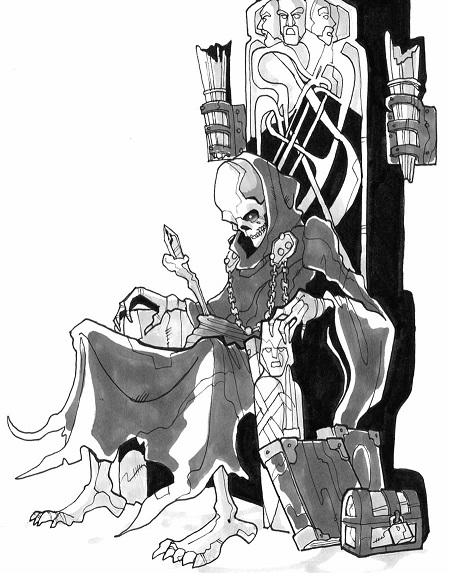 When adventurers first intrude the aberrant crypt thing's lair, it will match their demeanor (although never so friendly as to be suspicious). It will ask the intruders to leave its crypt. If the intruders persist, the crypt thing will use vanishing trick on the target that seems least able to resist (the party wizard, perhaps) and declare that it has disintegrated this victim. Again, it will encourage the intruders to leave. If the party calls its bluff, it will attack with its claws, continuing to use vanishing trick as it recharges.

A pale, solitary skeletal being which always wears a brown, hooded robe, the crypt thing stays in its lair permanently (at least, none have been encountered elsewhere) and will not attack if it is left undisturbed.

The warped skeleton boneblades and putrescent zombies are initially laying in their coffins. The boneblade coffins are adjacent to the crypt thing's throne, and they will rise immediately to defend its master. Four zombies rise on each of the 2nd and 3rd turns.