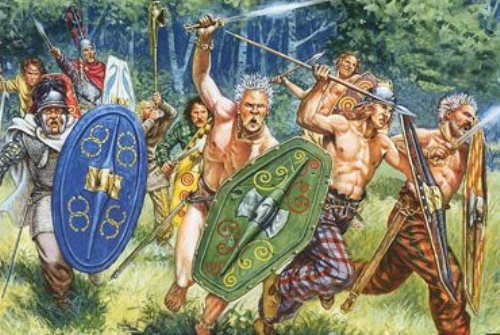 Their manner of fighting, being in large measure that of wild beasts and frenzied, was an erratic procedure, quite lacking in military science. Thus, at one moment they would raise their swords aloft and smite after the manner of wild boars, throwing the whole weight of their bodies into the blow like hewers of wood or men digging with mattocks, and again they would deliver crosswise blows aimed at no target, as if they intended to cut to pieces the entire bodies of their adversaries, armour and all!

Aside from their physical prowess, there is another thing that sets the celtic born apart from other humanoid races - Their shamans paint intricate patterns on each tribe member who has come of age, each and every pattern unique. It is speculated that the spirits of the deceased or perhaps the Gods themselves guide the hand of the shamans into these patterns, connecting the fighter with his ancestors. This religious ritual is important, if not the most important, part of the preparation for war. The bright blue warpaint is made up of woad and lard. The woad is corrosive - it contracts the skin, getting the adrenaline pumping for battle and in many cases, it even scars the skin over, causing many warriors to be permanently marked by their unique patterns. Their ever-present warpaint has earned them the name "Pict Warriors", which derives from an ancient language, meaning "Painted Warriors". They are often found wearing tunics made of wool or linen, with simple armlets. Their winter attire includes a heavy cloak as well, with a rim of animal fur. These cloaks are often adorned with a brooch in the shape of their tribe sigil that holds it together.