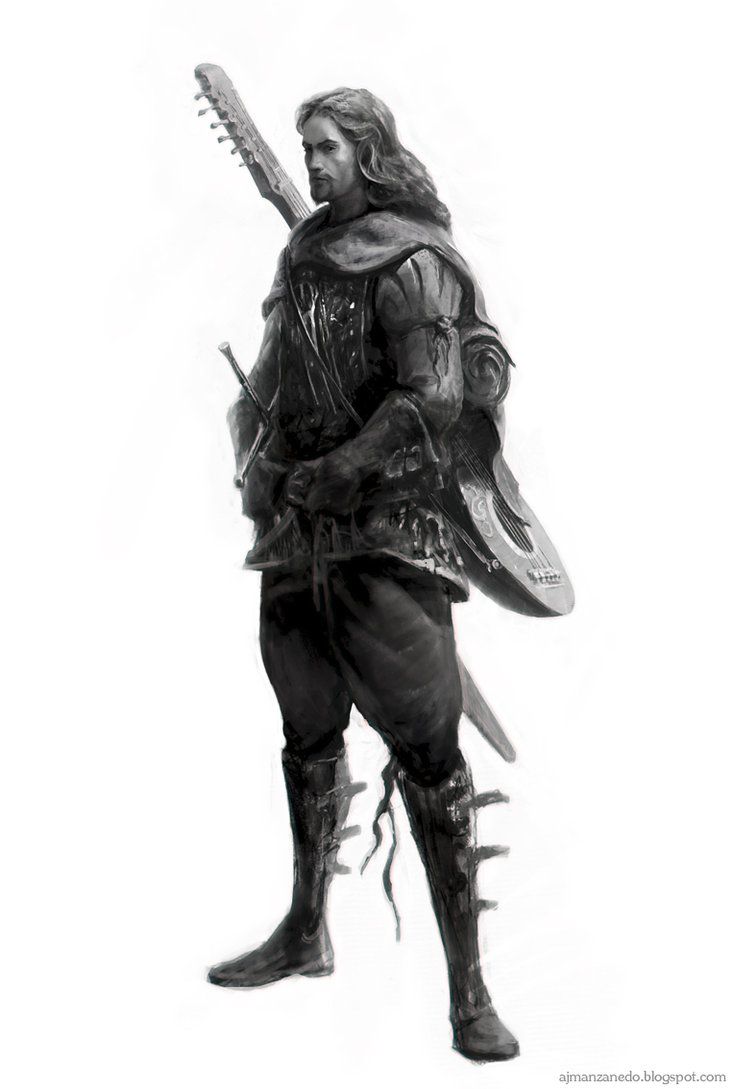 Fayvien, the Blind Bard, bringer of mirth, music, and revelry.

Once a mortal wanderer, the Blind Bard looks over any and all who would give the gift of music to the world.

Born as a mortal, Fayvien's existence was a converging of fates. He was born a carrier of dragonblood and fey magics, but the overwhelming strain this put on his unborn body cost him his sight. With his status as an Aanan, a rare human born with a supernatural penchant for sound, he was sought out by a Boumman who swore his life to defending the infant Fayvien until he achieved his destiny, whatever that might be. After a lifetime of wayfaring and spreading the joy of his music, Fayvien ended his own life by infusing the last motes of his energy into a ballad so supreme it earned the approval of his patrons, Jubila and Olidimarra. His life was spared and his soul ascended to stand beside his gods as a seer and singer of fate.

Fayvien was known to dress in dark grey's and blacks, perhaps to accent the golden tint of his hair and clouded eyes, or perhaps because the blind need not care for the details of color. Any who knew him in life would remember his frequent desire to accompany any situation with song, and his pure elation at being allowed to perform for anyone. The Blind Bard was always kind to others, especially his eternal ally, Robert the Hushed, who's aid was likely the only thing keeping the helpless man alive.

Also known as 'The Blasphemer' or 'The Blasphemous', Fayvien's relations with certain deities is a history debated fiercely between many clergies. His legend speaks of his many romances, most of which were suspected to be deities of all alignments. Perhaps this piece of his past was fictionalized in order to detail the universality of his art, or perhaps his affairs were in fact divine in nature. Regardless of the truth of the matter, most followers of goddesses (and some gods) fervently discredit the Blind Bard, insisting that their patron would never lower themselves to love or be loved by a mere mortal.

To follow Fayvien is to understand his mission in life, which was simply to spread joy and mirth wherever he went, to whoever he met.

Few follow the good bard, as he himself was an adherent to Jubila in life. Most who recognize Jubila also respect the memory and motivation of Fayvien, her favored child. Some Chaotic Good minstrels and performers model themselves after his example, giving the gift of song freely and readily to any who wish for it. This form of worship is all Fayvien would have wanted in life, and so is seen as the best method of reverence for believers.

Those desperate to commune with the bard, for whatever reason, would be disappointed to find that he cannot or will not speak plainly, but will instead grace the greatest celebrations held in honor of Jubila with his aspect so he may give the gift of song and sound. At Full-Moon festivals, the title of Grand Muse is given to any bard whose performance is great enough to merit the accompaniment of Fayvien's aspect, who will appear beside the performer, merging his music with the bard's art flawlessly. It is considered the highest compliment.

The Pantheon of Tirr was the most involved with Fayvien's life, so many associate him with that divine house, however he was also an agent of Olidimarra, leading many to suspect where the Blind Bard truly sits in the heavens. Most followers simply accept that Fayvien's presence can be felt wherever he needs to be.