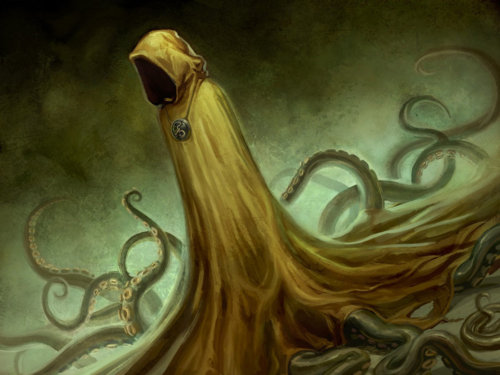 Farspawn are truly alien creatures the likes of which this world has never known.

Farspawn are alien creatures the likes of which can never occur naturally on the Material Plane. Their thought process is completely alien to us, being from the Far Realm and contrary to popular belief are not ENTIRELY malevolent, rather they are apathetic and uncaring. They are more interested in studying the many races of the Material Plane, learning about them and their cultures and absorbing what knowledge they can, for we are as alien to them as they are to us. A Farspawn on the Material Plane is likely to choose a singular being such as an adventure and follow them, never straying too far, learning what they can from them.

Farspawn have a very strange appearance, hailing from the Far Realm this is to be expected. All known Farspawn wear a long yellow cloak with a hood that hides most of their physical features save one, the many tentacles that help them to move along the ground in the place of feet. Some have even speculated that this yellow cloak is even an actual part of their body they cannot remove. They can use their tentacles in place of their hands to hold things but they are unable to be used in combat. The hands of a Farspawn are long and thin, each finger having 5 joints have having only 3 fingers and a thumb with an eye in their palm. While they can see from their eye in their palm, it is usually closed and resting. If one were to pull down the hood of a Farspawn the visage would be too terrible to look upon for very long, possessing innumerable eyes and many tendrils that spill forth from a fanged too wide grin. Despite being a Medium creature, Farspawn are still incredibly tall "standing" between 6'5 and 8' on average.

Farspawn have no preconceived notions of the Material Plane races, rather, their beliefs for very quickly based on what they have studied. If they were to spend much time in a xenophobic human town, they would quickly come to look down on all non-human races, while if they spent much time traveling with an elven druid, they would develop and appreciation for nature and the many sentient races of the world.

All Farspawn that are "born" on the Material Plane are True Neutral until they gain sufficient experience to create their own identity which tends to very WILDLY between Farspawn, however, they tend not to become Lawful in alignment as few Farspawn are exposed to an environment with this alignment which would accept them.

Farspawn do not worship deities, rather they pay respect to the cosmic entities that rule over the Far Realm. Very VERY rarely will a Farspawn ever take to worshiping a true deity. It is highly unlikely to happen simply because of how far apart they are from the gods that rule over the Material Plane.

Farspawn speak a unique language of guttural grunts, snaps, snarls, whistles and hissing sounds. It does not have an actual name and only an aberration can learn this language. They can also learn Abbysal, Infernal, Draconic, Common and Undercommon.

Farspawn will typically have two names, their actual name, typically something unpronounceable by humanoid standards so they pick a second name which is almost always a word from one of the many languages of the Material Plane. It could have some deep significance or it could just be something that they thought sounded interesting. Absurd names like Chair or Tree have been recorded before.