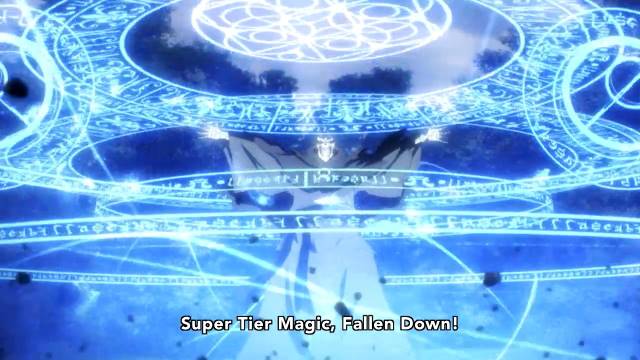 This spell is considered a Super-Tier Spell, classified as a 12th Level Spell for DC purposes. In order to cast this spell, the spellcaster must have access to 9th level spells, and Epic Level or (10th level) spells. As the spellcaster begins the incantation for the spell, it becomes extremely noticeable as large blue rune inscribed rings of blueish magical energy form around the spellcaster. Upon casting the super-tier spell, the caster calls upon a huge pillar of blue light from the sky that will burn so bright and hot that it will appear like the whole world has turned white dealing 666d6 of Fire damage and 666d6 of Force damage. After a few seconds, it will leave behind an area burned to a cinder, devoid of life, any remaining creature or object remaining in the area will be dealt an additional 10d8 Fire damage per round for rounds equal to the spellcasters ECL. This spell deals massive damage, especially to undead-type enemies. Any undead creatures hit by this spell receive 3x the damage normally dealt. The caster is unaffected by this spell. This spell can only be cast once per 7 days before being used again. If the caster of this spell has an ability score for their spellcasting ability of 30+ or higher they can cast this spell regardless if they have a seed or not and do not need to make a Spellcraft check. Animate objects which are reduced to 0 Hit Points by this spell are instantly vaporized. Inanimate objects hit by this spell are left ruined and if reduced to 0 Hit Points, are instantly destroyed. This spell bypasses any Damage Reduction a creature or object might have, any evasion-like abilities, as well as any immunities regardless if the animate/inanimate creature/object states it has immunities. The spell cannot be dispelled nor is it affected by anti-magic spells or abilities. If the object/creature has a special text saying it also disregards other abilities which bypass immunities, the creature/object instead is treated as if it makes its saving throw and receives only 1/4th damage from this spell. The saving throw DC for this spell is (10 + Ability Modifier [x2] + Spell level).

This spell as a Super-Tier Spell can be affected by Metamagic feats, which possibly increase this spells potency and spell DC level. If enhanced by a Metamagic feat such as SRD:Maximize Spell, this spell is considered to be a 15th Level Spell. If the caster also wishes to use any other Metamagic feat to enhance it as well it also increases this spell's power such as Quicken Spell, this spell's level increases again. When enhancing this spell with Metamagic Feats, the spellcaster must expend spell slots equal to the intended spell slot the Metamagic Feat enhances the spell towards. Example) If both Maximize Spell and Quicken Spell are applied to Fallen Down, this, in turn, makes the spell's total a 19th Level Spell. The spellcaster must expend a total of 7 spell slots of 6th level or higher when using this spell.

If the caster uses the Metamagic Feat SRD:Quicken Spell, the feat normally allows the spellcaster to use the spell as a Free Action. However, this spell can instead be cast as a Standard Action instead of being cast for several rounds.

If the spellcaster is attacked and takes damage equal to more than a 1/4th of their total HP, they lose the spell as if it had been expended. For next 3 rounds after the spellcaster uses this spell, they cannot take any action besides their movement.