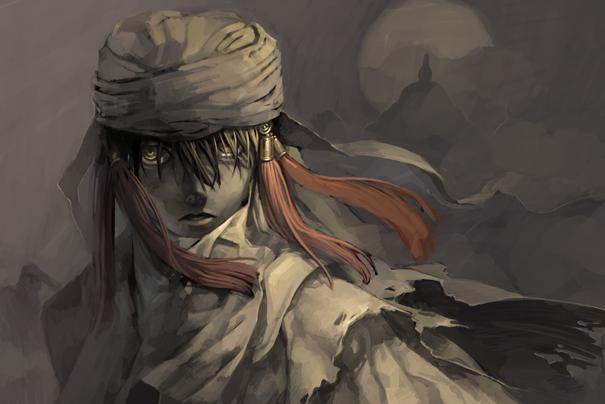 Not all time walkers seek to travel, or even care how far they can jump through time. No, some time walkers find their their powers are a blessing, and seek to share the experience with other entities. These time walkers find that time is like a grand maze, and at the end of each corridor is a new event, a new puzzle to solve, or a new foe to fight, and they seek to introduce these possible timelines to their friends and companions. These time walkers are known as eternal walkers, and they hold it within their power to show others things that few others could ever see. Eternal walkers tend to be friendly people who enjoy a little bit of fun at even the strangest times, going wherever they choose to go, whenever they choose to go there.

Eternal walkers are difficult opponents to handle upon the battlefield, leaping out at an enemy at the strangest times, and seeming to make people miss a few seconds of their life with barely a thought. Eternal walkers are often enclined to make friends quickly, and show them the wonders that they have seen. Coincidentally, people who want to see how many different things exist out there and who wish to experience as broad a range of experiences before they die are drawn toward eternal walkers.

All of the following are class features of the eternal walker.

A person who has accompanied the eternal walker in this way cannot go within 100 ft. of an alternate version of themselves without both verisons immediately becoming fatigued and taking 4d8 points of Con and Str damage, to a minimum of 1, lasting until there is at least 100 ft. between the two versions of the person. A person accompaning an eternal walker this way is otherwise subject to the same limitations and allowances a level 1 time walker is subject to.

Jump Augment: An eternal walker is someone who has the ability to play with the fabric of time, and does so readily. Though, after a time, an eternal walker learns to twist this fabric more to his advantage. At first level and every three levels thereafter (4th, 7th, and 10th) the eternal walker gains a jump augment from the following list.

Ease of Passage (Ex): An eternal walker with this jump augment has learned to attune his bodies to the stresses of travelling through time, and can make the passage almost easy to bear. An eternal walker with this jump augment gets a +5 bonus to any Fortitude save made when using his time jump class feature. Additionally, all who accompany him on a jump are not required to make a Fortitude save when the jump is made.

Ease of Thought (Ex): An eternal walker with this jump augment has learned to hone his mind, allowing him to comprehend his confusing path through the flow of time with greater ease. An eternal walker with this jump augment gets a +5 bonus to any Will save made when using his time jump class feature. Additionally, all who accompany him on a jump are not required to make a Will save when the jump is made.

Quantum Jump (Ex): Some eternal walkers eventually learn to twist the fabric of time to such a degree that they can hurl themselves through space as well as time. An eternal walker with this jump augment can, at the end of a jump, move their body to any location within 1,000 feet +100 feet per eternal walker level of his original location, and then finalize the jump. Additionally, anyone who accompanied him on the jump are teleported the same distance, and in the same direction, the eternal walker may still rearrange their locations freely, as long as all who accompanied him remain within 100 feet of his location.

Soft Jump (Ex): Creatures heal with the passage of time. Though, when you find yourself jumping to another point in time instantly, you tend to miss out on it's passage. An eternal walker who manages to realize this soon discovers that, by manipulating the threads of time, they can actually heal wounds and ease suffering. Whenever an eternal walker with this jump augment jumps, he can choose to heal himself and every being who accompanied him on the jump by a number of hit points equal to his eternal walker level × his Wis modifier. The eternal walker can also heal ability damage or drain in a paticular being accompanying him on the jump while using this jump augment. The eternal walker does so by exchanging 5 points of hit point healing for 1 point of ability damage or drain healing.

Swift Jump (Ex): Moving through time is a paradoxial thing, since it technically takes no time at all, yet is still percievable. An eternal walker who realizes this may also realize that, to him, the passage of a moment is an irreliavant thing. An eternal walker with this jump augment gains the ability to make a jump as a free action. Additionally, after making or attempting a jump, an eternal walker must only wait half as long as normal before he can attempt another jump.

Temporal Strike: An eternal walker is a powerful force upon the battlefield. This ability functions exactly like the time walker ability of the same name. The distortion bonus increases by +1 every other level (2nd, 4th, 6th, 8th, and 10th). If an eternal walker gets a temporal strike bonus from another source the bonuses on damage stack.

Delay: After travelling through years worth of time, an eternal walker finds that it's easy to send someone through a couple of seconds worth of it. At 3rd level an eternal walker gains the ability to make a single attack as a standard action, if this attack lands then no damage is dealt, instead, the target of the attack drops one place in order of initiative.

Moment Stop: Motion through space, for an eternal walker, is exceedingly simply when compared to motion through time. At 9th level an eternal walker gains the ability to take one 5 ft. free step as an immediate action that does not actually count against the total immediate actions or swift actions he can take in a round. If this ability is used after an opponent has moved to a square where they threaten the eternal walker, but before the opponent makes an attack, then the opponent counts as having used his move action for the turn unless he has the spring attack feat and his total movement doesn't exceed this total speed. This ability can only be used once every 1d4 rounds.

Combat: On the field of battle, an eternal walker has it within their power to turn the battle of it's head in an instant and strike down even the most formidable foes. They have the ability to practically stop lines of enemies in their tracks using temporal strike, while their delay strike ability can prevent a battle from ever happening.

Resources: While temporal dancers do not actually have an organizations in and of themselves, their very nature makes it easy for them to befriends any kind of person, and then possible gain access to any kind of organization, no matter how remote. An eternal walker may be quick to befriend talkative rangers or sociable fighters for this exact reason too.

Eternal Walkers in the World[edit]

Wanderers, hosts, devastators, these are the usual roles for an eternal walker to fill. Consequently, it is not unusual to see an eternal walker surrounded by well connected people or in an odd place, such as the crater of a volcano, with a small group of friends, though the latter tends to be more common. Eternal walkers can be found anywhere in time, as long as there is a person to reveal the wonders of time to, a friend to make, or a foe to strike down.

NPC Reactions: The grand majority of the time, an eternal walker will be greeted as anyone else in this world would be greeted. Though, it is common for an eternal walker to befriend a stranger, and soon, after returning to the same location a few more times, they tend to be greeted with racuous yells of greeting and offers for wine and invitations to competitions.

Characters with ranks in gather information can research eternal walkers to learn more about them. When a character makes a skill check, read or paraphrase the following, including information from lower DCs.

Eternal Walkers in the Game[edit]

Eternal walkers are rare individuals. Upon the field of battle, they seem to be everywhere at once, bouncing around from one place to the next, and slowing long strings of enemies with ease. On the other hand, in person, they are warm and friendly wanderers who can be found somewhere one second, and then be nowhere to be found for ages afterwards. Truly, eteranl walkers are rarities in this world

Adaptation: Eternal walkers can be customized for any game. A paticular eternal walker could be a wealthy dignatary who owns a mansion in a prominent city, and takes excursions to the beginning of time with a few friends. On the other hand, it could be that an eternal walker is a well known trader who brings beautiful types of fabric that have been lost for ages to market. Then, there could be a few eternal walkers who live simply for destruction, and tear into other times, bringing with them horrid monstroucities that quickly decimate anything and everything that they see.

Sample Encounter: Orin Maske grew up in a cold world, always shunned out into the freezing darkness of the night, always powerless as he saw atrocities acted upon those closest to him, always wishing death upon the evil people of the world, but never getting his wish. Until that is, the day he turned 13 he realized that he had a strange power, the ability to go back in time at will. The possibilities rushed through his mind, and so he trained himself, learning to affect time's passage in more and more exotic ways, until he found that he could actually rip the flow of time to a degree that others may be able to travel with him whenever he made a jump. When he realized this ability he had, he immediately wanted to show it to someone, and went to a friend he had made many years before. Orin asked him if he wanted to go away, to travel to places far away from the place where they lived. Naturally, the boy said yes, and they left, going from city to city, time to time, living through many good times and many terrible times, sometimes coming within an inch of death, other times staying in the same place for an entire year. As they travelled this way for a long time, collecting new people who wished to travel with them as they went, and even falling in love. Needless to say, Orin's life was never as horrid as it had been before, ever again.