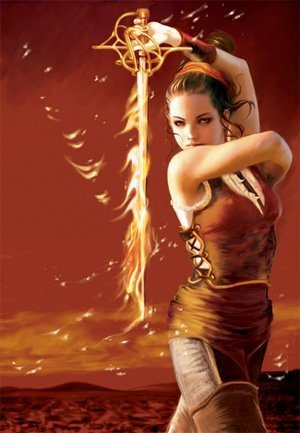 A lone figure stood at the end of the hallway with a wicked smile on her face. Titus was unafraid though, after all, he was a Paladin, he had faced down much more vile things then some half-crazed adolescent girl. Titus drew his sword and spoke "In the name of Justice, give up, and I will arrest you unharmed. But if you resist, I shall not hesitate to give you an early execution!"

The girl looked up at the Paladin. "Silly male." Then in a blink of an eye, a huge fireball roared from her fist. Titus spun to the left and realized this was not going to be easy, as the girl let out a evil laugh and charged...

A Bender brings a new approach to combat for the party. An Earthbender can turn the very ground into a weapon, while an Airbender can draw the very air from your lungs. A party with a Bender is a formidable one, but a Bender is not without weakness, and should look to the sturdier members of the party for support.

Bending is also a inborn talent, Benders are born, not made. Because of this, Benders of all types tend to be proud and assertive. They also dress the part. Airbenders tend to wear lose, light colored clothing, with few (visible) magical, or mundane, trinkets. Firebenders also wear lose, comfortable clothing, but tend to be prouder, and even arrogant, they show their wealth and dress in reds and oranges. Waterbenders wear dark colors, and more regal clothing. Though not as haughty as a firebender, Waterbenders are not afraid to show the world what they are. Earthbenders, dress in greens and browns, and tend to wear things that show the muscles the best.

When making a bender, especially at levels higher than first, remember that while proficient with certain weapons, a Bender is a martial artist. So items and equipment that improves their unarmed combat is a good idea.

Abilities: Benders use their Charisma for magical attacks. Wisdom helps with their AC. Choose one base element among Air, Fire, Earth. and Water; this will be the basis for your Bender's damage type. With the case of Earthbenders, who would theoretically be able to create walls of earth, a good rule of thumb would be to allow Earthbenders the ability to bend 2/Bender level feet walls. With the case of width, it would be 2 feet/Bender Level by 2 feet/Bender Level, and for thickness make it .5 Feet/Bender level, with 1 Foot of thickness equaling 15 HP, and 14 AC.

Races: A Bender can be from any race, but they tend to make sense towards their race. For instance, not many Elves become Firebenders, and not many Dwarves become Airbenders. But anything can happen.

All of the following are class features of the Bender.

Weapon and Armor Proficiency: Benders are proficient all simple weapons. Benders are also not proficient with any armors or shields. A Bender wearing any armor or shields, or carrying a heavy load, loses all class abilities.

Increase Speed: A Bender can move at greater speeds when they are in their elements. An Airbender can expend a bend to gain momentary flight, an Earthbender can gain tunneling, a Waterbender can walk on water, a Firebender can move at a better speed, and a Thunderbender can climb at better speed. For this ability the speeds are 30 ft, and for the Firebender and Thunderbender it is 20ft. All of these expend a bend for that day, and last a number of rounds equal to your Bender's bending ability score modifier. The speed of this ability is determined by the table above. For Firebenders, add the speed bonus to your base land speed during this ability.

Unarmored AC Bonus: A Bender has the innate ability to sense incoming blows due to their link with the elements around him. Thus giving him a bonus to his AC equal to his wisdom modifier. They also every five levels gain a +2 bonus to their AC.

Bend Element: A Bender can turn the very elements against an opponent, yet only if the element is available; meaning the element of the Benders type must be within 50ft. A Bender can manipulate his element a certain number of times per day equal to his charisma modifier + his bends known , choose to make 1 of 4 different kinds of attack with his bending. Bending takes a standard action, and requires a free hand. The four types of bends are as follows...

The damage done by a bender's elemental bend overcomes energy resistance equal to the Bender's class levels (in Bender) plus his charisma modifier, and a Bend is considered magical for overcoming Damage Reduction. In the case that a creature is immune to a Bender's specific energy or damage type, a bend still does damage, but only half. Benders add their charisma modifier to their bending damage. Additionally, a successful bend pushes a target back 5 feet as long as they are the same size as the bender. A smaller target gets pushed back 10ft per size category difference. To push back a larger size category target, the bender must spend one additional bend point per size category to push back 5 feet. A larger category target is otherwise unaffected by this additional push of the bend unless the additional point(s) are added.

Bending does not provoke an attack of opportunity.

Talented Bend: A Bender can use his bending abilities without the use of his hands. Without free hands, Air Benders and Water Benders can't normally bend. Fire benders and Earth Benders learn to traverse their energy downward towards their feet. making them an all around elemental fighter with impressive effect.

Unarmed Strike: A Bender gains Improved Unarmed Strike as a bonus feat. Also a Bender's unarmed strikes deal 1d6, not 1d3, damage. This damage increases as a monk's would.

Elemental Resistance: A Bender gains Damage Reduction/Energy Resistance 6 to his damage type. Air=bludgeoning, Fire=fire, Water=cold, Earth=bludgeoning, Thunder=Electricy. This bonus increases by 1 every two levels. The damage reduction/energy resistance applies to the Bender's second type once he reaches 11th level, and the Bender's original energy type no longer does damage to the Bender.

Evasion: Starting at 2nd level a Bender takes no damage on a successful reflex saving throw.

Channel Bend: Starting at 8th level a Bender can channel one of his bends into one of his unarmed attacks; either the first or the last attack when the Bender makes a full round attack. This can only be done a number of times per day equal to the Bender's charisma modifier. Damage from the Bend only deals damage if the attack roll is successful.

Improved Evasion: Starting at 10th level a Bender takes no damage upon failing a reflex save.

Create Element: At 10th level a Bender has trained how to draw his element out of the natural material space around him. It forms and concentrates around the Bender's fists. The Bender has the ability to create his element at will.

Improved Channel Bend: At 14th level, a Bender can unleash a destructive wave of elemental attacks. He can now channel a bend into all of his attacks during a full attack. This ability can only be used three times a day and uses a bend known per attack.

Death Bend: At 18th level a Bender can now cause death with some very cunning bending. An Airbender can cause suffocation, an Earthbender can rip the minerals out of your blood, a Firebender and Thunderbender can cause your blood to boil, and a Waterbender can tear the blood right out of your body and manipulate it. When a Bender chooses to use his Death Bend, usable twice a day, the opponent must make a Fortitude save equal to 25+ the Bender's charisma modifier, or die. Upon a successful saving throw, the opponent still takes 15d6 damage.

Primal Elemental Shape: At 20th level a Bender can now become the most powerful representation of his element. Once per a day equal to the Bender's charisma modifier, as a free action, a Bender can become a primal elemental of his type. He keeps all of his mental ability scores (intelligence, wisdom, and charisma). This ability is free for 1 round. But at the beginning of the second round, the Bender must make a DC 10 will save. The DC for the save increases by 3 for every round the bender keeps it. If the Bender ever fails the Will Save, he loses the form and is exhausted. The Bender can chose to end the form at any time as a free action.

Religion: Religion varies throughout Benders. The life of a Bender does not need the justification of a god, but some Benders still follow racial deities. Some Benders chose to follow nature deities.

Other Classes: Benders dislike or like other classes depending on what type of bender they are. A Firebender tends not to get along with the lawful and disciplined classes, while an Earthbender would get along great. All Benders get along great with rogues, monks, and rangers, because, like themselves, are largely self taught.

Combat: A Bender is a supplemental caster. Whether they are slinging fireball along with the wizard, or taking place of the wizard. The Bender's attack bonus allows him to survive in combat, but he should not be without support.

Advancement: A Bender tends to stay a Bender, but Benders taking levels in fighter or ranger to enhance their combat abilities is not un-heard of, also a Bender/cleric is a fearsome opponent.

Elemental Benders in the World[edit]

Daily Life: The life of a Bender is a busy one. Constant training is needed to master elemental control (especially in the case of Firebenders). Some Benders are performers, using their bending to create a spectacle, while other use it as a mean to better themselves.

Notables: The most notable Bender is Elith "Blaze" Kain, a Firebender who once took out an entire orc raiding force by causing the very ground they stood on to melt.

Organizations: All four types of Benders have schools where that specific type of Bending is taught. These tend to be small though, as Benders are not a plentiful people.

NPC Reactions: Benders are treated just like a wizard would be, respected, but also a little feared.

Characters with ranks in Knowledge (the planes) can research Benders to learn more about them. When a character makes a skill check, read or paraphrase the following, including information from lower DCs.

Elemtaral Benders in the Game[edit]

EL 9: Kali is a Firebender who has deciding to start a war with the peaceful Druid enclave outside of town. The Druid's have asks the PC's to stop her.