Stoic and peaceful denizens of the deep forest, and ferocious warriors when stirred into action. 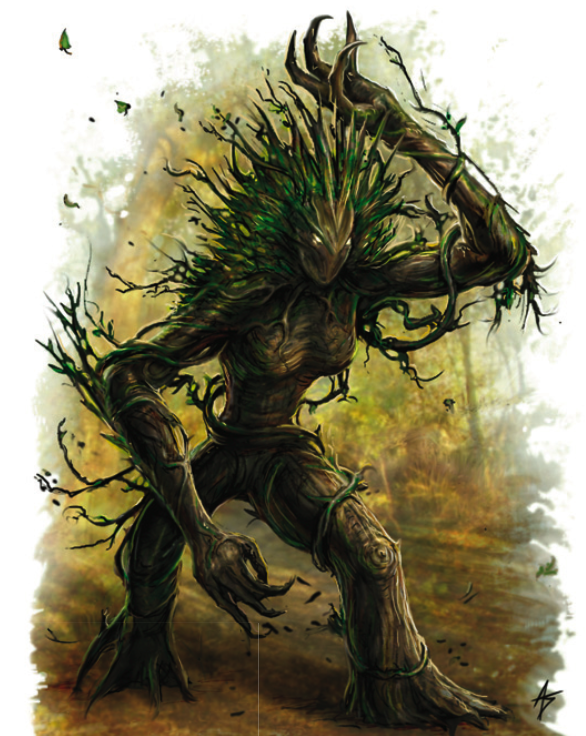 Play a Dryad if you want...

Dryads are humanoid trees, with skin like bark, legs like sturdy trunks, toes like roots, and hair like a crown of leafy branches. Dryads tend to look vaguely female, and tend to choose feminine names for themselves. When taking on the guise of another race, Dryads prefer to take on the appearance of a beautiful maiden, often an elf, eladrin, shifter, or human. In truth, Dryads are androgynous, as a Dryad's flowers contains both male and female reproductive organs. In their resting state, a dryad is a tree of roughly the same size and height as the dryad in its humanoid form.

Dryads are a part of the forest. Dryad communities are found in large, old forests, and often have close ties to any neighbouring elf, eladrin, shifter, or human communities, especially to those communities where the druidic faiths hold sway. Long lived, peaceful, and patient, dryads are often reluctant to leave their grove and disinterested in the wars and troubles of other races. However, dryads are not aloof. Dryads form deep and lasting friendships and are fiercely protective. A dryad might go adventuring simply to accompany a close elf, shifter, or human friend. A young dryad might also be seized with wanderlust, for after all, there is a saying among dryads: ' these roots are made for walking'.

Syrinx is a dryad warden. When her home grove was threatened by a host of aberrations, she realized she could ignore the outside world no longer. Now she is a member of the Wardens of the Wood, and she fights with the ferocity of nature to protect her new comrades-in-arms, and ultimately the world.

Pitys is a dryad seeker. After fifty years of life, wanderlust took root in Pitys' heart. Now she travels with a band of adventurers who appreciate having a nature savvy guide whose skill with the bow is unmatched. Pitys uses her speed and surefooted agility to keep away from enemies and her ancient dryad magic to make sure her shots don't miss.

Drosera is a dryad fighter. War has come to her people, and the old ways are not enough. She has taken up sword and chain mail forged of steel and learned to fight like a dwarf. Her ferocity and determination has earned her the respect of her companions. In the heat of battle she thinks only of victory, but during the quiet of the night, she often dreams of home, and wishes to return to peaceful days in the forest once these days of trouble are behind her.