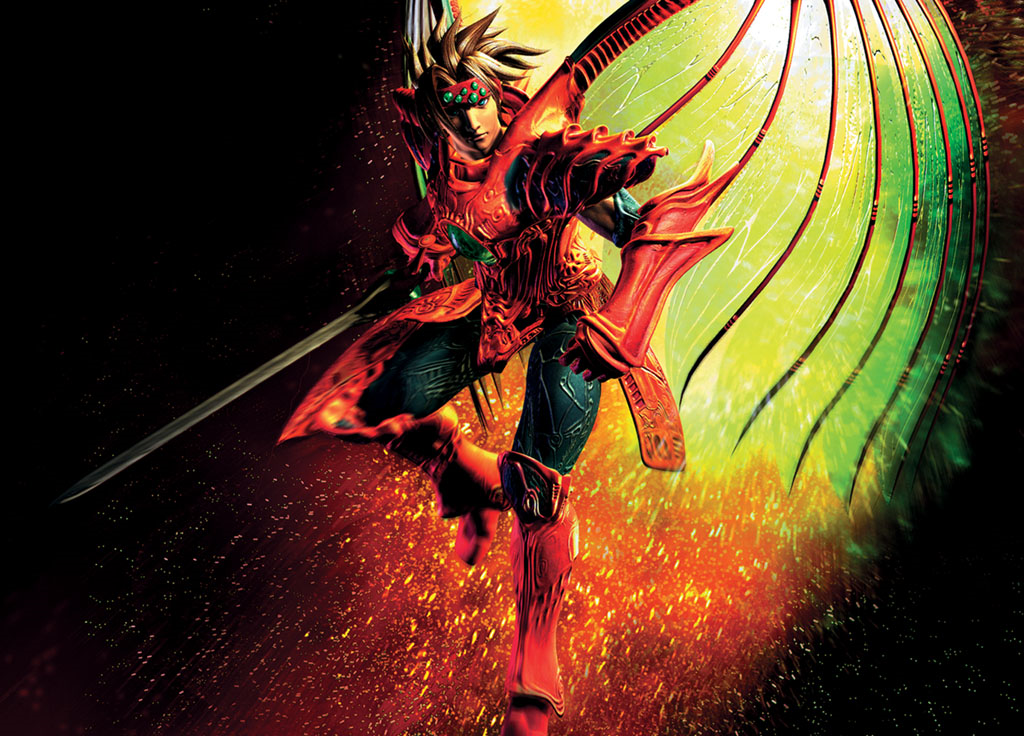 As if they were gods, Winglies ruled over all living creatures, and used them as slaves. The enslaved suffered a terrible domination and injustice. Their anger turned to a flame of fury; then, a gust of wind blew throughout the lands, spreading the flame to a blazing fire. The wind was Emperor Diaz. Seven incarnations of Dragons served the emperor. These were the first Dragoons. Their bravery inspired people to take up arms. Thus began the Dragon Campaign. It was a harsh war. Both people and Winglies suffered countless injuries and fatalities. After a long period of suffering, it was the humans who aquired the future. The age of humans had begun.

Dragoons are not made, they are chosen. They are powerful warriors of fate, and only a handful ever exist at any given time. To become a Dragoon, a character must come into possession of a Dragoon Spirit, represented in game as an extremely rare, small marble with a faint glow in it, colored to match one of the many dragon colors (Red, Black, Blue, White, Green, Bronze, Silver, Gold, Copper, or Brass). A character can come into possession of a Dragoon Spirit any number of ways, but the three main ways are as follows. One) A dieing dragon may give his spirit to you, transforming his soul into a Dragon Spirit, and granting you the power of a Dragoon. Two) A "wandering" Dragoon Spirit may come into your possession randomly, such as being given to you, being bought, etc. Three) If you can defeat another Dragoon in combat, it is possible to take his Dragoon Spirit and adopt it as your own. All three means are at the Dungeon Master's discretion. You can not happen upon a Dragoon Spirit, or specifically seek at Dragoons to defeat in combat.

The following are class features of the Dragoon Prestige Class.

Weapons and Armor Proficiency: A character gains no new weapons or armor proficiencies when taking a level in the Dragoon Class.

Dragoon Spirit Gauge: The dragoon can only maintain it's Dragoon form for only a certain amount of time.A Spirit Gauge equals out to one round of the use of the dragoon form. The gauge increases at every level allowing for a character to maintain the form for a longer period of time. Though, the Dragoon may choose to leave his or her dragoon form before the gauges expire.

Dragoon Transformation: When a Dragoon transforms, a flash of light emits from wherever the character is holding their Dragoon Spirit. When the transformation is complete, the Dragoon appears to be only holding their current weapon and wearing armor in a color reflecting that of the type of dragon he or she has the spirit of. This armor also has translucent wings on the back that grant a fly speed equal to the Dragoon's land speed with good maneuverability. The armor is so light that it doesn't cause any armor check penalty and the wearer can still cast spells without any problem. The transformation is a free action that does not provoke an attack of opportunity. A dragoon may only transform a number of times per day equal to their dragoon level.

Dragoon Form: Once in the Dragoon form, the character automatically gains immunity to their Dragon Spirit's element. The Dragoon's armor grants them a +4 armor bonus. Their weapon is also given the element of their Dragon; for example, a Red Dragoon would gain a flaming weapon enhancement. If a Dragoon makes a full attack action, and hits with all of their attacks, they may make another attack at their highest base attack. If that attack hits, the weapon acts as if it had scored a critical hit with an elemental burst.

Align Weapon: The power of the Dragon Spirit has become so strongly in tune with the Dragoon that their weapon outside of their Dragoon form is now given their dragon's element.

Summon Dragon: Once a Dragoon reaches level five, the spirit as become so close to the user that once per day, in their Dragoon form, the Dragoon may summon an adult dragon matching their Dragon's spirit. The Dragon lasts for five rounds after being summoned.

A character with the Dragoon Prestige Class, can not take levels in Dragoon like other classes. Before they can advance a rank in Dragoon, a character must seek the guidance of a character with a higher rank in the Dragoon class to act as a mentor. This mentor must then decide whether or not the leveling character is "worthy" (At the Dungeon Master's Discretion) of obtaining a new level in Dragoon. If the player character is deemed worthy of obtaining a level, the mentor will then lead the character into a place of solitude. Once their, they will spend 24 hours in hard training. After the 24 hours of training, the student must make separate will and fortitude saves (DC 10 + The current level of Dragoon they are trying to obtain). If they fail both saves, they can not take a new level in Dragoon at this time. If they fail one save, but not both, the student suffers a -3 morale penalty to all attacks and skill checksfor the next step of the leveling process. If they succeed at both saves, they may move on to the next step without penalty. The student and the Mentor then engage in one on one combat, were the Student must prove themselves to their master that they are indeed ready to level. For the purposes of combat, the Student is treated as having temporarily gained a level in Dragoon. Combat ends at the Dungeon Master's discretion, and based on the student's performance, the Dungeon Master decides if the student is allowed to keep his/her new level in Dragoon.

If a Dragoon were to loose possession of their Dragoon Spirit in any way, either by death, giving it to another, etc, they then become an Ex-Dragoon. (This shall be further expanded upon as the class features come into play.) Ex-Dragoons still retain the ability to act as a mentor of their level in this prestige class before becoming an Ex-Dragoon for characters seeking to obtain higher levels in this prestige class.

Combat: Dragoons are generally high damage output, multipurpose fighters. They deal a ton of damage on their own, and have quite a few bonus skills to help them get the job done.

Advancement: As desribed in "Leveling As A Dragoon," Dragoons do not level normally. However, they can be tacked on to greatly improve the combat abilities of generally ANY character.

Resources: There is no set organization of Dragoons. Dragoons are generally singular individuals, traveling in solitude. Occasionally they may band together to fight a singular, great threat, and then disband afterword. Older Dragoons of a higher level do not adventure often, as they are more devoted to training, or scholarly pursuits. Generally, a higher level or older Dragoon will only set out on the road to seek out a younger warrior, either to pass on their Dragoon Spirit, or to train lower class Dragoons so that they may advance in levels.

Dragoons are now a secluded grouping of idividuals. Few people beyond the Dragoons themselves know about them. Those that do should be considered highly knowledgable, and potentially very dangerous.

NPC Reactions: Most NPCs have no clue what a Dragoon is. If an NPC with a discernable inteligence witnesses a Dragoon Transformation, and they do not have prior knowledge of Dragoons, have them make a Will Save (DC 15 + The Dragoon's Rank in the class + The Dragoon's Charisma Modifier). If they succeed, they may act normally. If they fail, they suffer from uncertainty or awe when fighting or speaking with a Dragoon, suffering a - 5 morale penalty on attacks and skill checks within the Dragoon's Presence.

Characters with ranks in Knowledge (Lore) can can try to recall something about Dragoons to learn more about them. In addition, it is possible to try and research information on Dragoons if you are in the appropiate place. To research check is a simple inteligence check (1D20 + Your Int Modifier), however, you may add your total (Including your int modifier) Knowledge (Lore) modifier to the roll. In both cases, refer to the chart below for your result. Any written information on Dragoons is going to be found in some of the oldest texts, likely in old, ancient, or even ruined libraries, in some forgotten, runic language.

Dragoons in the Game[edit]

Adaptation: Dragoons should only ever be included in a campaign specifically tailored to the Dragoon Prestige Class (Such as the campaign for Legend of Dragoon). Expect that if you use this in any campaign, that everyone in the party will want one.

Encounter Ideas: If you, the Dungeon Master wish to include a simple encounter with a Dragoon character, well that's all fine and dandy. If you wish to include an actual fight with a Dragoon, then said Dragoon should only ever be an important story character. Dragoons are strong, tough, and above all, only a handful ever exist at any given time.

Determining Dragoon CR/EL: For determining the Challenge Rating/Encounter Level that includes characters with ranks in the Dragoon Prestige class, including Player Characters, The Dungeon Master should count every level in Dragoon as two normal character levels.