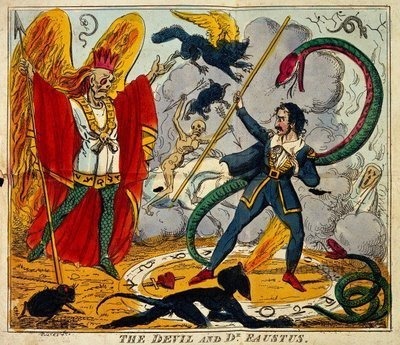 Doctor Faustus is one of the Patron Gods of science who was a man that studied theology up until the day he died. He consorted with the demons of many religions and struggled through his mortal life over the issues of Gods and Demons and Angels in his descent towards madness. After death he found himself on the Planes of Understanding where he took up the mantle of the everlasting stride to learn and to gain knowledge.

Followers of Doctor Faustus are inaugurated by a Cleric of Faustus (whom prefer to call themselves Theologians or Scientists) and are to give the Promise of Self. Which the follower pledges to pursue science and understanding while keeping his mind open so that he may not fall to madness or absolute chaos. While the religion itself believes that a bit of chaos is healthy they also do not agree with chaos in general as it goes against the laws of science. Followers usually find a place as an Alchemist, a wandering Cleric, or other such profession, even Wizards follow Doctor Faustus to represent their love of scientific learning. It is religion for the well learned and those who do join it are discouraged from coercing with the unintelligent but are encouraged to spread the holy words of Science. Many followers of Faustus also observe his example by coercing with the echelons of other deities as Doctor Faustus did to gain an understanding of the Science of Theology.

The clergy are mostly people who spend their time in scientific pursuits. Mass is Lectures on the scientific discovery of the priests and also to talk of the story of Doctor Faustus. The temples are labs and the holy books are the tale of Doctor Faustus and the many lab-notebooks of the priests. All are invited to these (with special selection at the door. Those of the Chaotic Evil or Lawful Good alignment who are found out as such are turned back at the door, unless they are a Faustian Inquisitor.) with open arms for the spreading of the word of Science is a Faustian Cleric's most prized ideal and what they say is "Their best job they have ever had." Many clergymen are actual professors at universities for the incredibly learned.

Their is no Pantheon although they do recognize all the other pantheons as the Science of Theology is included and crucial to Faustian religion. Though they recognize them as gods they strive to surpass them and bring the power of the gods to the scientists as a form of expression. To learn theology is vital in this task.

When a Faustian comes in contact with another deity he is to learn all he can about it and any contact with a member of a pantheon is a wonderful opportunity. Any who are forcibly converted are welcomed back with open arms if they can provide learning. The motto for Faustians regarding other pantheons is simple. "Speak kindly, take notes, and be ready to run for your life."