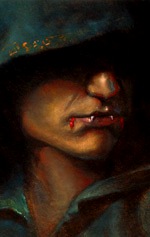 Playing a Demi-Vampire has its perks as a player. Good ability bonuses, and some cool powers, but really its entirely meant for role-playing. A campaign centered around racism, fear, and subterfuge is the best place for a Demi-Vamp, so the player can get into the mind of his or her's character, because A Demi-Vampire's mind is very much like the outside world. Even the LG ones are filled with hate, and lust, and fear.

A Demi-Vamp is very rarely a creation of love, but almost always lust. Most Demi-Vampires inherit their condition from their fathers, a relationship that is usually filled with distrust and hatred, assuming the Vampire lets the child live. On top of this, the conflicting nature of a Demi-Vampire can create a schism in the very nature of the character. At one end the human side. At the other, the vampire.

How will he chose?

Despite which parent they were raised by, all Demi-Vamps are naturally seductive, even if they aren't trying to be. This control over people tends to instill a Demi-Vamp with a vein of arrogance, though just like any being, there are exceptions.

Demi-Vamps are tall, slender, and pale. Because of their super-hyper metabolism, their bodies stay in near perfect shape always. Their eye color depends on if they drink blood or not. Red eyes show blood has been drunk in the past 24 hours. If not, they will be a pale purple.

Demi-Vamps relationship with other peoples are always strained. Even the LG Demi-Vampire Paladin will have trouble earning people's trust, simply because of what they are.

Simply because of their nature, Demi-Vamps tend towards Chaos and Evil, and almost never are good.

Demi-Vampires have no lands of their own, though a few neighborhoods in some very large cities are known to house small communities of them.

Demi-Vampires would worship the god/goddess of whomever raised him, but they typically tend to not follow any set religion.

Demi-Vamps speak common, they also would speak any languages they pick up on their travels.

Demi-Vamps are givin names based upon who they were raised.