A room encounter to be placed into an undead-themed (mega)dungeon. Since the room is rather large, as are the skeletal inhabitants, a large dungeon is suggested - no 5-foot-wide corridors! The nature of the skeletons suggests at a faintly Lovecraftian precursor race that inhabited the dungeon long ago, but this can be done away with a few tweaks.

A room filled with skeletal remains is a warning signal like no other to players, so it might be a bit hard to ambush the players. To help in this, have the rest of the dungeon equally full of remains, and avoid fights against skeletons before this one. The desecrate effect is another dead giveaway, but one that can't be avoided. Here's some suggested ways to use the encounter:

This skeleton is crouched and broken, many of its bones twisted and cracked. Even so, it is an imposing and off-putting figure: the skull seems to belong to some sort of wicked bird, although it's a toothier bird than you've ever seen. The thing has three-fingered claws, talonlike feet and a humanoid bone structure. It looks like some sort of amalgamation, but as far as you can tell, all the bones belong to the same creature. A gold ring adorns a bony neck, and you guess it isn't intended as decoration.

These skeletons belong to a slave race to the original inhabitants of the dungeon, and look like smaller, less imposing versions of their masters. Some time in the far past, they rose against their tyrants, and whatever horrible spell took the lives of the dungeon's inhabitants in a blink of an eye happened in the middle of this rebellion. They have no weapons, but their claws are more than enough. Ancestor slave skeletons are marked on the map with an S.

The skeleton before you looks like a mix-and-match of animal parts: something reptilian, something avian, something humanoid... nonetheless, there are no seams, nor signs of bones having been cobbled together. You shudder to think of what the creature looked like when it lived.

The remains of the master race that was assaulted by its rebellious slaves. The ancestors are massive, alligator-slash-eagle-slash-human beasts that practiced advanced necromancy. Now, their skeletons animate to fight against those who would desecrate the long-desecrated dungeon. Ancestor skeletons are marked on the map with four A's.

While the rest of the skeletons here look like the remains of genuine creatures from far back, this one has to be built from several parts: the huge bird-like beast has a wingspan far greater than its lithe, serpentine body would suggest, and the head is definitely crocodile-like. Strange fabric has been pulled taut on the wings to simulate the leathery real deal that once might have been there, before rot set in.

The winged monstrosities were the workhorses of the ancestor race, and transported wares with their massive bulk. The clever fabric wings that they've been fitted with allow the creatures to fly despite their skeletal state. Winged monstrosity skeletons are marked on the map with nine W's. 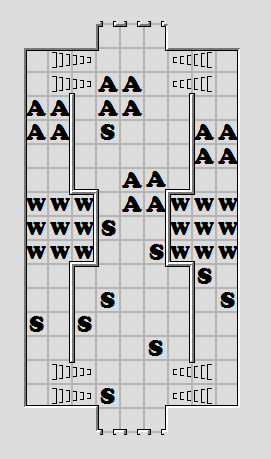 Your light source struggles to illuminate the vastness of the room before you. It's a gargantuan hallway, bordered by two elevated balconies. The room has architecture and decor that are absolutely beautiful - or might have been in ages past. Now the tapestries of the walls, which once reached to the ceiling, have crumbled to moldy piles. The polished stone is anything but, the air is dusty and smells foul, and a generally unpleasant feeling permeates the room.

The most striking feature are the skeletons. You've seen remains within this dungeon before, but this room takes the cake. The strangely-preserved skeletons of ancestral beings both large and small lie crumpled on the floor, once locked in combat before their sudden demise. In the middle of the room, two colossal skeletal avians, no, serpents, no, things arch above the hallway: statues, judging by the way bones have been strung together and canvas has been tautened on the remains of wings.

45ft.-by-75ft. room, 80ft. high. Two balconies (check map) 10ft. high from the floor. Entire room under a permanent desecrate spell (calculated into the stat blocks above; successfully dispelling the effect only suppresses it for 1d10 rounds). Ten ancestor slave skeletons (S, check map), four ancestor skeletons (four A's, check map) and two winged monstrosity skeletons (nine W's, check map) which start off as piles of inanimate bones that spring up and attack opponents when someone passes between the two winged monstrosities. Skeletal remains can be destroyed beforehand (hardness 5, hp as the skeleton equivalents above), but destroying a skeleton has a 25% chance of immediately animating the other ones. Destroying a winged monstrosity skeleton immediately animates all the other skeletons.

Players are expected to enter the area from the south. Position the encounter and its room in your dungeon in such a fashion as to make this the likeliest (or the only) possibility. Clever players will make use of the room, and are likely to retreat from it in certain cases, so the room they enter from should be usable for combat as well - the skeletons will follow opponents, even if it means losing the benefit of the desecrate effect of the room.

The skeletons fight systematically according to orders whispered into their dead ears long ago. The slaves approach foes as quickly as possible, obstructing hallways with their bodies to protect their stronger cousins. They surround foes and take them down through massed attacks. The ancestor skeletons, on the other hand, work as ranged support. They lob cast-iron javelins the size of longspears at their foes, moving only to attain better position. If they're engaged in melee, they exchange their ranged attacks for devastating melee.

The winged monstrosities approach foes from above, with at least one of them hovering near spellcasters to force Concentration checks. Both of them attempt to snatch foes to hoist them to the highest point of the room and then fling them down, preferably into the middle of clumps of slave skeletons and far away from friends. If enemies resist snatching (or avoid damage from falling), the monstrosities resort to full attacks from above.

The spell that slew the inhabitants of the room (except for the winged monstrosities, which were added later) did not turn them into skeletons: they dropped dead without so much as a mark on their bodies. Whoever or whatever turned them to their current status, and preserved their bones, did it with the help of a rod of withering, which is the treasure for the encounter.

The rod can be found in the room, possibly in the hands of one of the ancestor skeletons, in which case that skeleton approaches foes to use the rod offensively. However, it is far more likely that the rod is located in a treasury elsewhere in the dungeon, in the hands of a monstrous thief (found in another room), or in the hoard of whatever fearsome monster you decide to use as the dungeon's boss.

Greedy players can also pry off the thin gold collars that the slave skeletons wear; each is worth 100 gp.

Dem Bones is an encounter that has a chance of being comically easy for a well-prepared party. A party with one or two strong nukers can take care of most or even all of the skeletons before they have a genuine chance to act. A powerful priest, especially one with the Sun domain, can destroy most of the skeletons and send them on the run by using a single turn attempt. And at the end of the day, they're just skeletons: if the party is well-armored, has tons of hit points and/or has ways of avoiding damage through other means, the skeletons themselves become moot - there's not much variation to them.

It's best to use the encounter as a particularly dire one on a party slightly too low-leveled for it; four characters of 11th or 12th level will still find the skeletons a big threat, whereas the difference even a few levels make can make it pointless. Just be careful not to outright slaughter your players: the massed attacks of the skeletons can still prove incredibly dangerous, especially since they can deal a massive amount of damage in a round by luck alone.

Varying the exact makeup of the fight is also a possibility. The skeletons are much more threatening if supported by even one spellcaster, usually an evil cleric who buffs the undead and debuffs the players. You can even replace a few of the slave skeletons with low-level spellcaster variations of your own design: dark masterpieces of the bygone civilization whose remains the players are now fighting.