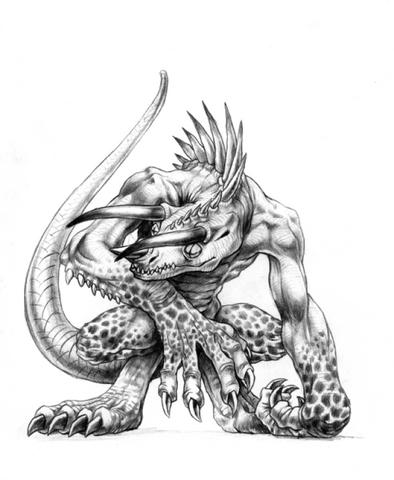 Deathclaws are a large, agile and strong species of mutant Jackson's Chameleon created through genetic engineering, with the addition of DNA of various other species. However, due to mutation, they have lost their color-changing ability.

Deathclaws are very aggressive, territorial, and carnivorous. They typically live in small packs of around eight to twenty members led by an alpha male, who is the only one allowed to mate with the females.

Deathclaws have a hunchbacked, humanoid build, stand nine to ten feet tall in adulthood, and have a thick, resilient, and muscular hide ranging from brownish-green to light yellow. Their heads are abnormally large and have horns growing out of them. Their most noticeable feature, though, are twelve-inch-long, razor-sharp claws that can kill almost any other creature in only a few swipes; hence their name.

Deathclaws are some of the most hated, feared, and misunderstood creatures in the wastes – when walking among humans, an appropriate disguise, such as a loose-fitting robe with a cowl to cover the head, is an absolute necessity. Most people will simply attack a Deathclaw on sight, or attempt to run away as fast as possible.

Deathclaws can be found roaming the wastes and in tribes, but also live in ruins and caverns.

Although they do not have vocal cords, they can growl and shout, and seem to be able to mimic human speech much the same as a parrot does. However, normal Deathclaws aren't intelligent enough to be capable of real speech.