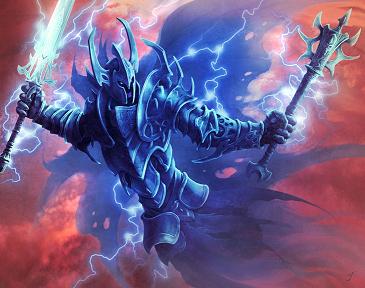 Dark Tempest Blades may look like a personalized natural disaster to an average peasant. The raw natural force which is inherent in them seems to be uncontrolled and erratic. However, true Dark Tempest Blades are able to focus these chaotic forces to achieve their goals.

The Dark Tempest Blade combines an arcane spellcasting class with a martial discipline class. A good combination would be a Sorcerer, Warmage or Wizard with a Warblade.

Important abilities are Strength (for good melee combat), Constitution (for more hit points a better fortitude save) and Intelligence/Charisma [depends on arcane spellcasting class chosen] (for higher save DCs for your spells and more spells per day)

All of the following are class features of the Dark Tempest Blade.

Spellcasting: At each level, you gain new spells per day and an increase in caster level (and spells known, if applicable) as though you had gained a level in an arcane spellcasting class to which you belonged before adding the prestige class level. You do not, however, gain any other benefit a character of that class would have gained. If you had more than one arcane spellcasting class before becoming a Dark Tempest Blade, you must decide to which class to add each level for the purpose of determining spells per day, caster level, and spells known.

Maneuvers Known: At first level and every two levels there after you learn a new maneuver known from one of the following martial disciplines: Diamond Mind, Iron Heart. You must meet the prequireties for every maneuver learned this way. You add your full Dark Tempest Blade levels to your initiator level to determine your total initiator level and your highest-level maneuver known.ToB

Maneuvers Readied: At 3rd, 6th and 9th level you can ready one additional maneuver per day.ToB

Stances Known: At 5th level you learn a new stance from the Diamond Mind or Iron Heart Discipline.ToB

Arcane Wrath (Su): At 1st level you gain the ability to unleash your arcane powers through your weapon. As a swift action you can expand one of your prepared spell or spell slots to gain a +4 bonus on the next single attack or martial strike, as well as an extra 1d10 of damage per spelllevel expanded. For example: by giving up a 3rd level spell you gain a +4 bonus to your attack role and deal an extra 3d10 of untyped damage if the attack is successful.

Thunderbird Stance (Su): While this stance is active spells with the electricity descriptor are cast at casterlevel +1 and an additional +1 to caster level checks for overcoming spell resistance. You also gain a flyspeed of 60 feet with good maneuverability.

Twining Strike (Su): If you hit two or more different targets in one round, you may add the Twin Spell metamagic feat to your next spell casted, without increasing the spells level. The spell must be cast before the end of your next round. The two spells must target two of the same opponents hit by the previous attack. This ability may be used once per encounter.

Devastating Tempest Stance (Su): While this stance is active increase die-size by one and save DCs by +2 for spells with the electricity descriptor. You also gain a flyspeed of 60 feet with good maneuverability. In addition when you enter this stance you can choose to expand one prepared arcane spell, or an arcane spell slot. If you do, each time an enemy hits you in melee combat he is struck by a lightning shield that deals 3d6 electricity damage. This shield lasts for a number of rounds equal to the expanded spells level.

Iron Superconductivity (Su): At 8th level you can become superconductive for electricity. As a swift action you can expand one of your prepared spells or spell slots to enhance your Lightning Blade ability for one weapon by a number of d6 equal to the expanded spells level for the rest of your turn. In addition the damage type for your Lightning Blade ability changes from electricity to force damage for the rest of your turn. This ability may be used once per encounter.

Baleful Thunderstorm (Sp): At 10th level you may cast a secial spell which consists of two spells with an electricity descriptor. You expand these two spells or spell slots normally but they count as one spell. Metamagic feats applied to this special spell increase only the spell level of one of the expanded spells or spell slots, (you choose which spells level is increased) but effect the complete new spell. This spell takes a full round action to cast, wether you apply metamagic feats or not. This ability may be used once per day.

Combat: Either front line combatant with magic firepower to increase damage, or magic artillery with melee combat skills for better self defense. Depends on either main focus on class levels in martial discipline class or on levels in arcane spellcasting class.

Dark Tempest Blades in the World[edit]

NPC Reactions: Dark Tempest Blades will cause fear in average civilians by simply entering their village or crossing their way. Babarians, Knights and other Fighter-like classes will fear or respect them for their additional magical powers. Wizards and Sorcerers will be jealous of their combat skills but will scoff that they need these combat skills because of their lower magical powers.

Characters with ranks in Martial Lore, or Knowledge (arcana) can research Dark Tempest Blades to learn more about them. When a character makes a skill check, read or paraphrase the following, including information from lower DCs.