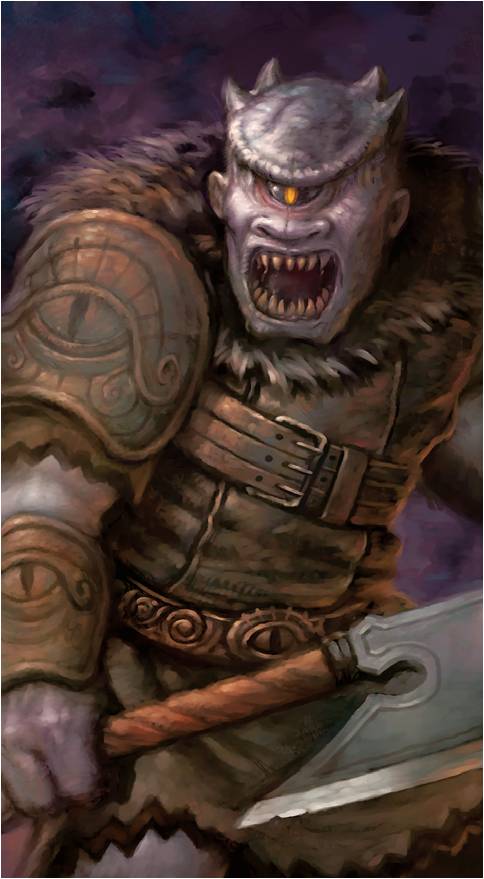 One-eyed giants banished from the Feywild. Pity any unfortunate trapped by one of these foul beasts

Cyclopses are mysterious but still feared throughout their realms. They don't build cities or borders or have any form of government, they dwell in small groups and let others unkowningly populate their lands. Cyclops are cunning and foul, delighting in leading smaller humanoids' children and eventually their parents into their labyrinth caves and the fields where they raise their beasts, to be manipulated, tortured and eventually eaten. Otherwise they spend their lives wandering, raising their beasts, looking after their children and looking for a way to re-enter their true home in the Feywild.

Play a Cyclops if you want...

Cyclopes resemble large, hairless one-eyed humans. They are tall and stocky perfectly suited to their adopted homes in the rugged mountains and caves. Their hands are big enough to crush a humanoid's skull, but they rarely have to resort to hand to hand combat due to their intimidating size. Their skin is a darkish to lightish grey and their one eye is usually black with a yellow pupil. Their features are stony and hard-set in both sexes, with a largish nose, a ring of small horns on their crown, razor sharp triangular teeth and their iconic eye just below their jutting brow.

Cyclopes live for a very long time and are hard to kill. Some particularly old Cyclopes can remember when the Cyclopes were banished from the Feywild. They breed slowly to match their age but grow fast; a Cyclops reaches maturity at about 10 years of age. Cyclops population is slowly succumbing to infertility and birth defects as their time away from their rightful home catches up to them. The Cyclopes must return to the Feywild or die out.

Cyclopes are cunning and cruel, but secretly long for their home in the way a child longs for his or her parents. Like a child, they find it hard to bear being away from the Feywild, which results in their cruel pleasures and depiction as child-eating monsters. Cyclopes live in small groups, but each individual Cyclops controls such a vast area of land, it appears to non-Cyclopean races as if they live by themselves. Cyclopes are open and brotherly to members of their immediate group, but slightly suspicious of Cyclopes outside of their group. Even so, they enjoy peaceful relations with each other, and there has not been a war among Cyclops since they were banished from the Feywild.

Many a Cyclops leaves his home group to adventure, and thus, often become drawn to the forces of evil, where they are often seen in battles and encountered as adversaries by adventurers. Cyclopes are skeptical about gods, and once had their own group of gods but have stopped worshiping them as they feel that their old gods "abandoned them" when they were banished from the Feywild.

Argea is a Cyclops Barbarian. Her entire family group was attacked and killed by local villagers when she was very young. She grew up in the mountains, and when she knew it was time, she came down and slaughtered all of the villagers, some 20 years later. Argea continues on her crusade of bloodshed throughout her realm, and wont stop until every single human village is burning, and every single man, woman and child is slaughtered.

Brontes is a Cyclops Warden. He left his family group to adventure throughout the world. Eventually, he found himself the bodyguard of a powerful and evil warlord. He protects the warlord from harm, and has saved the life of his master multiple times. The warlord goes to war against a mortal kingdom and leads his army from the front. Will Brontes be able to survive the war as his loyal bodyguard?