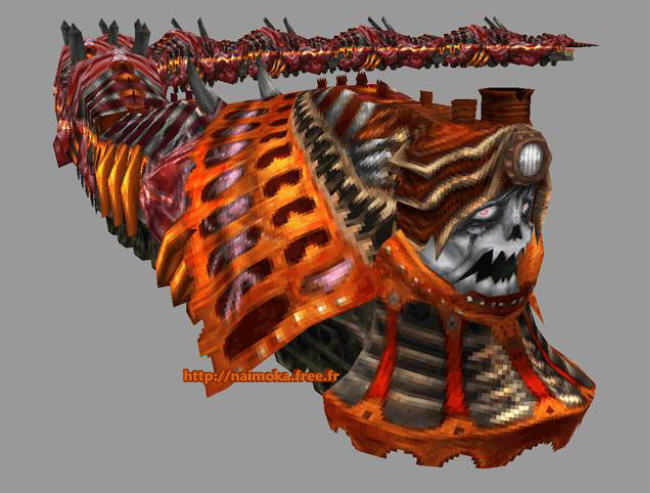 This Cloudrail Golem has a rather disturbing visage.

Down the tunnel you hear an ominous hiss of steam, and the heavy chugging motions of gears and pistons. A light appears at the end of the tunnel... oh... oh crap, it's coming this way! RUN!

Flying steam trains, the cloudrail golem is designed with transportation in mind. Traveling a swift 240 ft. feat in a single move action, it can travel the skies on rails of water vapor or fire, steam howling against the rush of wind. Within, a fire and a water elemental are bound, their interaction driving the engine ever faster.

Cloudrail golems are usually used to pull Cloudrail Carts, taking advantage of it's massive pulling capacity to transport large amounts of goods. Rarely are they used in combat, though it's swift movement means they provide an excellent escape for retreating troops.

This golem has is a large blocky steam engine made of iron and wood. It's from is decorated with a face, typically a dragon, a skull, or some other visage fitting for the owner. A cloudrail golem cannot speak, but it does make noises in the form of metallic growls, toots, whistles of steam, and loud bellows of its horn. It runs on wheels, but most of the time is airborne. It weighs around 5000 pounds and can store 4 medium creatures inside its body comfortably.

Cloudrail golems rarely fight, but when pressed into battle they usually come in charging, using their overrun and trample to knock the enemy prone and enjoying the AoO when they try to stand. The Steam Burst is used against crowds, and effective on fire-vulnerable creatures, though the golem does not have the intelligence to pick out who is vulnerable from sight. Unless commanded to do otherwise, the cloudrail golem will do whatever is best in the interest of self preservation.

Steam Burst (Su): Every 1d4 rounds a cloudrail golem may employ it's steam burst breath weapon, a 40 ft. cone of searing hot water vapor. It deals 8d6 fire damage, Reflex DC 18. The save DC is Con based. Due to it's watery nature, fire resistance is ignored when dealing damage, and fire immunity instead deals half damage to the creature, as if it were a Searing (Sandstorm) metamagic spell.

The Steam Burst deals 1d6 damage every 2 HD for advanced golems. For example, a 30 HD golem has a 15d6 Steam Burst.

Trampled opponents can attempt attacks of opportunity, but these take a –4 penalty. If they do not make attacks of opportunity, trampled opponents can attempt Reflex saves DC 29 to take half damage. The save DC is Str based. A cloudrail golem can only deal trampling damage to each target once per round, no matter how many times its movement takes it over a target creature.

Flight (Su): The cloudrail golem may fly at will at its land speed with average maneuverability. Like the Fly spell, if its flight is dispelled it drifts down for 1d6 rounds at 60 ft. a round before dropping.

Smooth Rails (Ex): Powerful and unstoppable, the cloudrail golem can ride over sandy, muddy, or even swampy ground without difficulty or decrease in speed.

Water Rails (Su): The cloudrail golem is under the effects of Water Walk constantly.

Typically a cloudrail golem is used to pull massive amounts of supplies. As such, additional carts may be added to the golem. Each cart is a Large sized object which costs 5000g and has no notable stats of it's own. However, when connected to a cloudrail golem it gains the DR 10/adamantine, flight, and half the hp of the cloudrail golem. If a cart is disconnected, the separated carts treat as if the flight had been dispelled, and drift for 1d6 rounds at 60 ft. a round before dropping.

A cart can be targeted as its own creature, and should be considered a large sized creature which happens to be following and taking up space behind the actual golem. It holds up to 4 medium creatures comfortably and each weighs 500 lbs. unloaded.

A cloudrail golem’s body must be constructed from 5000 pounds of iron pistons, plates, and bolts, and treated with rare oils and powders. The body is worth 5000g. Creating the body requires a DC 15 Craft (metalworking), DC 15 Craft (woodworking) check, or a DC 15 Knowledge (Architecture and Engineering) check.

Additional HD may be added for 1000g and 80xp per HD. It's breath weapon increases as it does do, as does save DC.