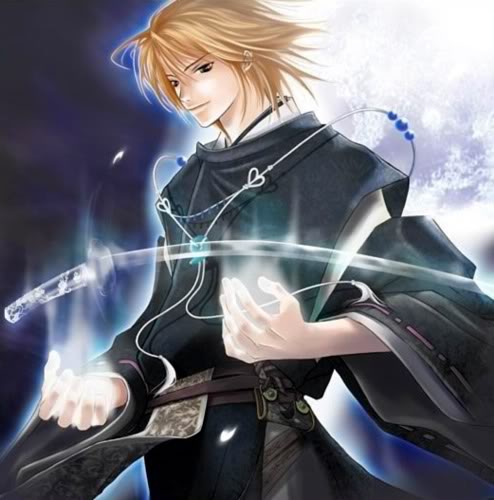 Chronoblades are beings who have developed the ability to manipulate fragments of time and space around them. Chronoblades manifest this ability during a pivitol moment in their young lives, when their utter desperation turns into power. Their mind and spirit fall into sync, giving way to their ability in the form of a blade forged from their resolve. However, they must rest in order to retain such power, or risk more than simply losing it.

Chronoblades are melee combatants who prefer close range, where they have more control of the battlefield. Although they can quickly close the distance between them and a ranged enemy, they tend to stray from fighting against casters, such as wizards. Chronoblades are at their best when faced against multiple enemies.

Races: Any race with no more than four limbs. Must have two arms and two legs.

Other: Must have had a resolving moment when the powers manifested. This moment must impact the chronoblades choices and path. (i.e - A lover being killed in front of him and manifesting his powers to kill the murderer. Goes on to be good, killing all murderers or evil, becoming a murderer.)

All of the following are class features of the chronoblade.

Time Manipulation (Ex): In order to use this class ability, the chronoblade must not be exhausted or helpless. If he is fatigued, he must make a successful concentration check (DC 10 + Chronoblade Level) to use this power. You may only use one ability per round.

Blades of Time (Ex): Power Points: 5. As a full-round action, the chronoblade is able to temporarily speed up time around him. He has the option to move up to his speed and make a normal attack action against every foe that is or becomes adjacent, with both swords. He cannot attack the same enemy twice. Enemies do not get an attack of opportunity against the chronoblade during the duration of this ability.

Distortion Gate (Ex): Power Points: 5. You distort the space in front of you as you move, using it to shift forward more quickly. As a swift action, you may move up to twice your speed (including land movement, burrow, climb, fly, and swim). Distortion Gate also dispels and counters Slow.

Temporal Mending (Ex): Power Points: 5. At level 2, you gain the ability to slow time around you and even begin to reverse it, causing your wounds to be reversed. You can heal yourself as a swift action. This action also heals status effects.(2nd: 1d8+1/level, 4th:2d8+1/level, 6th:3d8+1/level, 8th:4d8+1/level)

Temporal reset(Ex): Power Points: 15. At level 7.as a free action you may You can choose a item and for the next 20 rounds (2 minutes) you can summon that item in the state this ability was activated even if destroyed permanently. At 14th level you can make the effect permanent for 1 item.

Distortion Field (Ex): Power Points: 15. At level 8, you can distort the fabric of space around you in apparent random waves. Activating this ability causes all projectiles to have a 35% miss chance and lasts 10 rounds. A chronoblade must make a concentration check (DC 10 + chronoblade level) at the beginning of each of his turns, if he fails the DC check, the ability immediately stops.

Time Phase (Ex): Power Points: 20. At 12th level, the chronoblade can phase forward through time. In fact, you speed up so greatly that all other creatures seem frozen, though they are actually still moving at their normal speeds. You may perform up to 2 full-round actions, after which Time Phase ends. You cannot use any other abilities during Time Phase's duration. Any opponent you attack during Time Phase is considered flat-footed. This ability puts a great strain on the body and makes you fatigued for 1d4 rounds.

Final Moments (Ex):Power Points: 40. At 16th level, a chronoblade has experienced and acquired the knowledge of his destiny. He may form a final resolve if he so chooses. The chronoblade is given 1 minute to carry out his conquest. For 10 rounds, your Dexterity and Wisdom get a +8 bonus to their scores. You control how you perceive time, you get a +10 attack bonus, +10 deflection bonus to AC, and +10 to your Reflex saves. If the chronoblade does not have enough Power Points, he may sacrifice half of his current hit points to activate this ability. You may only use this ability 1/day and lose the ability to use Power Points for 24 hours at the end of the Final Moments.

Fast Movement (Ex) :At 3rd level, a chronoblade speeds up their internal temporal pace to gain a +10 enhancement bonus to their land speed. This bonus increases every 3 levels after 3rd (+20 at 6th, +30 at 9th to a maximum of +60 at 18th level).

Time Stands Still (Ex) : At 4th level and higher, a chronoblade sees the world more slowly and is able to better understand all components of his reality. The chronoblade can now add his Wisdom Modifier to his attack and damage rolls.

Precognition (Ex): At 6th level, the chronoblade becomes more fully aware of his surroundings and is quick to act. The chronoblade gets a +3 bonus to his Initiative. This increases to by 1 every 3 levels.(+4 at 9th level, +5 at 12th level, +6 at 15th level, +7 at 18th level). He also cannot be caught flat-footed, giving the chronoblade the Improved Uncanny Dodge feat, even if he does not meet the normal prerequisites. This ability also grants immunity to sneak attacks. This ability nullifies any ability that states otherwise unless done by a magical effect.

Timeless Body (Ex): Upon attaining 17th level, a chronoblade no longer takes penalties to his ability scores for aging and cannot be magically aged. Any such penalties that he has already taken, however, remain in place. Bonuses still accrue, and the chronoblade still dies from old age when his time is up. If the Chronoblade has an inanimate body or inanimate body parts, they no longer can become rusted or old though aging. From now on for the chronoblade are sufficient four hours of rest to restore everything.

Foresight (Ex): Upon attaining 20th level, the chronoblade becomes a master of manipulating time to his own will. Even if he is killed, his spirit can reverse fate itself. he can do this as an immediate action, he can reverse time around himself by reverting himself to the previous turn's hit points and position. He may activate this ability even if he is dead or helpless. Upon using this ability, it becomes the chronoblade's turn and his position in the initiative list changes accordingly.

Bonus Feats: The Chronoblade may take any fighter feat in place of a bonus feat.

Enchantment Bonus: The Chronoblade may take an enchantment from the list of Cleric or Wizard spells. The known spells are the same as those of the Wizard, the only difference is that the CD is of Wisdom. The Chronoblade should not prepare the Enchantment.

Bonus Feats: The epic chronoblade gains a bonus feat every 5 levels after 20th.

Religion: Chronoblades are not usually inclined to worship a deity, choosing to rely on their own power and resolve. Some chronoblades do choose a god, believing that they were granted the power to overcome their obstacle in life by a higher being for a greater purpose, whether it be evil or good.

Other Classes: Chronoblades feel very similar to a fighter, or possibly a divine likeness to the cleric, or even the arcane powers of a wizard. Chronoblades do not know how they came by their abilities, instead believing they have a likeness to one of the three classes. The usual neutral or care-free characters such as rogues are not usually respected by chronoblades, as they do not serve a purpose but their own.

Combat: Chronoblades are good with one on one duels, but great with one on five battles. Their ability to manipulate their speed makes them mobile and agile. But it is best to stay away from wizards and clerics, as they can easily hamper a chronoblade.

Chronoblades are often surrounded by friends or those he is loyal to. Some chronoblades gained their ability through a past encounter that no longer holds meaning, these chronoblades tend to either fall onto an evil path, using their abilities for selfish reasons, or they find a new purpose in which to give their all to. Only one thing is for certain: They will always have a motivational force behind their purpose that drives them forward.

Daily Life: Young or inexperienced chronoblades spend most of their day studying new fighting styles, perfecting current ones, or are frequently in deep meditation. Experienced chronoblades find a cause to fall behind, or live with those they wish to protect. But there are the few that readily train themselves, never satisfied with the power they've obtained and continously seeking the limits of their abilities.

Organizations: Chronoblades are few and far between, and a very rare occurance. Most chronoblades are ordinary people placed in extraordinary situations, which is the cause of their ability. Many are true fighters at heart, who seek to protect those they care for or are extremely loyal to an ideal, and willing to do more than die for it.

NPC Reactions: Chronoblades are regarded as irrational and careless. Their resolve to complete a task important to them, brings a danger to all those around the chronoblade. But those who meet them, are fascinated by their willpower to manifest their abilities. However, those who do not know of chronoblades regard them normally.

Characters with ranks in Knowledge (Arcana) can research chronoblades to learn more about them. When a character makes a skill check, read or paraphrase the following, including information from lower DCs.

Chronoblades can be found through all walks of life. From quiet, rural villages to busy, rampant cities. They can be poor or rich, any gender and any race. Most are noble by nature, continuing along the path that acquired them this power. Some change paths, choosing to selfishly gain power for their own purpose. However, most chronoblades tend to be melee combatants or physical warriors.

Adaptation: Chronoblades could have manifested their power through a diety, by divine purpose which becomes the driving force behind their motives. These can be any non-neutral alignment.