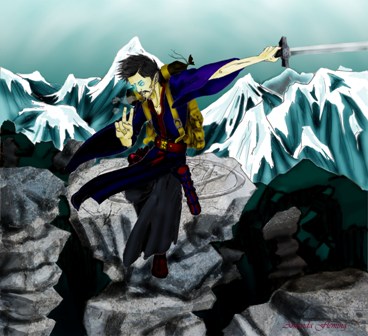 made by my best friend for me

Hailing from the Eastern world they bring strange magicks with them.

Group work- Mainly a class that stays away from the in order to do the most damage but are not completely inept at martial combat.

Abilities: Cast spells from inscribed talismans and runes that require no somatic components.

Races: Any race may be a Chi Mage but elves, humans, half-elves, and gnomes are more likely due to their affinity of the arcane.

All of the following are class features of the Chi Mage.

Summon Familiar: At 10th level a Chi Mage gains a companion of the following list (certain animals have been replaced as noted);

Glyphs: At every 3rd level a Chi Mage gains the knowledge of a glyph. Glyphs is an ability that has to either be tattooed on the body of the Chi Mage or imprinted into his aura. Each glyph learned can be used once a day. The glyphs fall in one of three categories: Offensive, Defensive, and Supportive. (Glyph power description after spells)

Talisman: All Glyphs can be written onto a talisman paper but it gives up the use of the Glyph for the day

Spells: From Wizard/Sorcerer spell list Plus Glyph of Warding at 4th level.

Glyph Description: Howling Blast- a cylinder 5 ft in diameter extending to 30 ft away. all creatures caught in the Blast are deafened and are dealt 1d4/2 levels max of 5d4 of slashing damage by a razor thin magical blades.

Forceful Push- blast of magic energies throws a medium creature 10 ft in the direction of the blast dealing 1d6 of blunt damage.

Blade Barrage- moving a bladed weapon in an arc in front of the caster cause a trail of magical blades to be left in its wake that rush forward and damages any creature in the path of a blade (blade moves until it strike something in a linear path), deals 1d6 of piercing damage.

Freeze- causes all enemy creature in a 50 ft burst to be stuck in motion, creature with more then 100hd are unaffected, last 1 min/4 levels.

Absolute Barrier- creates circle 10ft in diameter that block all incoming harmful effects for 1 min/3 levels. Negated by Disintegration, Sphere of Annihilation, and other destruction spells

Overload- by sending a jolt of auric energy into a touched creature and overloading all of it's senses knocking it unconscious for 5 min.

Slumber- forces creature in a 20 ft to falling into a deep sleep that lasts 1 min/level, creature with more then 100hd are not affected.

Switch- swaps the position of 2 creatures.

Deceptive Disappearance- relocates all allies in 100ft to a spot up to 10 miles away, when cast all allies seems to disintegrate even leaving behind piles of dust amounting the person.

Temporary Enchantment- enchants a weapon with an enchant you are able to imbue, lasts 1 round/level.

Collective- joins allies minds, allowing for all to speak telepathically, to increase resistance to illusion spells and affects by +5, allowing for a collective healing of sorts by the sharing of the life force: can heal 10/2-levels points of damage, and boosting moral; last 2 min/level.

Advanced Glyph Knowledge: Pick one of the glyph you can invoke, you can use it an extra time per day

Perfected Writing: Cost of creating a scroll is reduced to 1/4 of the normal cost

Religion: Chi Mages, like wizard don't do much in terms of faith but one that they would worship are as listed: Boccob, Wee Jas, Nerull, and Saint Cuthbert .

Other Classes: Paladin, Fighters, and Barbarians are a Chi Mages best friend as they are able to keep the fight away from him. The Monk a Chi Mage is able to find companionship with as they both use an inner power to fight. Sorcerers, Wizard, and Bard are always Friendly with as they are all of the arcane casting class, albeit they find the Bard's roundness perplexing. Druids peak the most curiosity of a Chi Mage by the fact that they are so in tune with the world. Chi Mages aren't the most comfortable around Rouges as they tend to be shady. Clerics and Chi Mage are also capable of getting along well as long as the Cleric isn't overbearing in their ways

Combat: Having the Glyphs that only require a thought to activate also a Chi Mage to fight and cast but those are limited. Generally they will stay being a class that can take damage better and enter a fight to intervene.

Advancement: Chi Mages are able to fight but now with the proficiency of the Fighter so Chi Mages maybe multiclass as a Fighter

Chi Mages in the World[edit]

Daily Life: Chi Mages tend to live near on mountains were they can cultivate they abilities without interruption and find the balance in themselves.

Notables: Treskan Golden-eye and 2 of his fellow Chi Mages had come down from the mountains and happened a crossed a small village under attack by a band of hobgoblins. Treskan and his fellow defend the villagers and healed most of the villagers with the powers. After tending to the wonders the monk like magic left and enigmatically as they came.

Organizations: Most Chi Mages live in mountains areas that are isolated from most civilizations as to you practice their art undisturbed. They either live alone or in temples. The Chi Mages eldest member tends to be the ones that lead the group.

NPC Reactions: Most of the time npc mistake Chi Mages for Monks for their humble and homely appearance or Wizards with robes and arcane devices about them. Which suits the Chi Mages fine as they have no want for overt attention.

Characters with ranks in gather information can research Chi Mages to learn more about them. When a character makes a skill check, read or paraphrase the following, including information from lower DCs.

Chi Mage in the Game[edit]

Chi Mages are well disciplined no matter what alignment they are. Good aligned Chi Mages are always willing to lend a hand and are very cheerful people. Though they may avoid fighting unnecessarily they do enjoy a good fight. Neutral Chi Mages are more prone be somewhat stoic and tend to be the observers then the actors. Evil aligned Chi Mages are the cold, calculating ones that are the strategist or military leaders.

Chi Focused Mage Glyphs: Summon (supportive)- Summons the highest ranks of your alignments for 1 hour, good or evil sub-types. i.e. Archons, Angels, Demons. Because of the power it holds this Glyph can only be used once every month

Sample Encounter: NPC Chi Mages would be the ones that take in weary travels, give directions, give a quest, or a major boss.