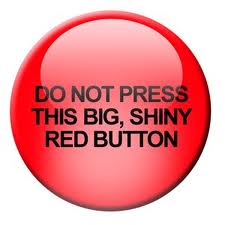 The Party enters the study of the Mage. The on the desk is a large amount of books, scrolls, and a large red button. The Rogue creeps up to the desk search for traps. Then against all instincts presses the button. Ten minutes later everyone asked why. His answer was simple. "It was a Big Red Button. Someone had to push it."

This monsters is the cousin of the Mimic. But instead of using Money to draw in prey they use Curiosity. And to tell the truth who can resist a big red button. And this button is very big.

A Chew'd Button often surprises an unsuspecting adventurer, lashing out with a heavy pseudopod. The creature does not necessarily fight to the death if it can succeed in extorting food from a party.

Adhesive (Ex): A Chew'd Button exudes a thick slime that acts as a powerful adhesive, holding fast any creatures or items that touch it. An adhesive-covered mimic automatically grapples any creature it hits with its slam attack. Opponents so grappled cannot get free while the mimic is alive without removing the adhesive first.

A weapon that strikes an adhesive-coated Chew'd Button is stuck fast unless the wielder succeeds on a DC 16 Reflex save. A successful DC 16 Strength check is needed to pry it off.

Strong alcohol dissolves the adhesive, but the mimic still can grapple normally. A Chew'd Button can dissolve its adhesive at will, and the substance breaks down 5 rounds after the creature dies.

Mimic Shape (Ex): A Chew'd Button can assume the shape of a large Red Button. It shrinks when docile but it returns to its normal size when touched or senses danger. A Chew'd Button body is soft and has a smooth texture, no matter what appearance it might present. Anyone who examines the Chew'd Button can detect the ruse with a successful Spot check opposed by the Chew'd Button's Disguise check. Of course, by this time it is generally far too late.

Skills: A Chew'd Button's has a +8 racial bonus on Disguise checks.