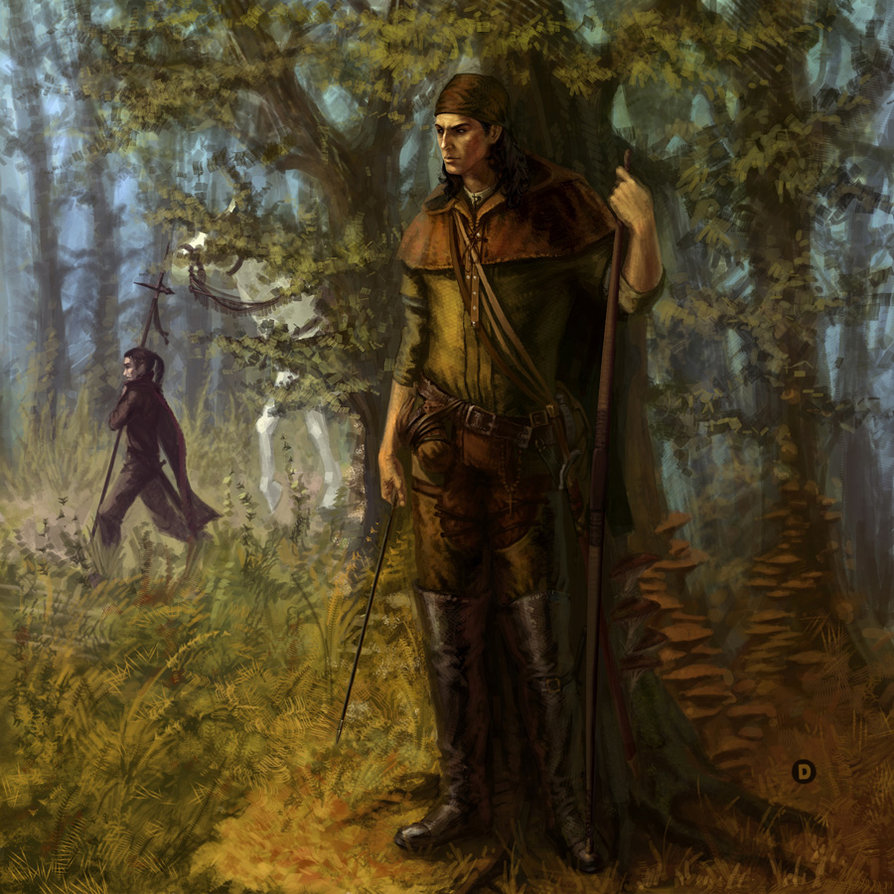 From the woods to the desert, from mountains to cities archers abound everywhere, but few are truly worthy of the title. The archer can shoot an apple at 100 yards and hit every time, he can shoot an arrow through his own arrow after hitting the bull's eye at 50 yards, and he can shoot a pixie in the eye at 10. No one is better when it comes to the mastery of bows.

The strong point of the archer is archery. Ranged combat. Letting enemies get too close is a mistake.

Abilities: Dexterity is important for most of the archer's skills, and it also decides how easy it is for them to hit targets. Strength increases some of the damage dealt, but isn't too important. Constitution increases hit points, and intelligence helps with their ability to get critical hits, and with their skill points.

Races: Elves are famous for archery, but that really doesn't mean that they are the best. Archers come from all races.

Alignment: Archers can be of any alignment. Archers from military backgrounds are usually lawful, while ones from small villages or the woods are usually neutral.

Starting Age: "Simple" or "As rogue".

Archers shoot bows. All of the following are class features of the Archer.

Bonus Feat: At first, and every even numbered level, the archer gains a bonus feat from the list of fighter bonus feats. He must meet all prerequisites for the feat as normal.

Aim (Ex): From second level onwards, the archer gains a +2 synergy bonus to attack and damage rolls with ranged weapons for every 5 ranks he has in Concentration.

Fast Movement (Ex):An archer's land speed is faster than the norm for his race by +10 feet. This benefit applies only when he is wearing no armor, light armor, or medium armor and not carrying a heavy load. Apply this bonus before modifying the archer’s speed because of any load carried or armor worn.

Defensive Archery (Ex): From 5th level onwards, an archer can always take 10 on his Concentration checks, even if he would normally be unable to do so. At 9th level this also applies to Tumble checks.

Form Ranks: From 11th level onwards, whenever an archer attacks, with a ranged weapon, from a square adjacent to an ally, he and his allies gain a +2 bonus to Concentration and Tumble checks for a number of rounds equal to the archer's dexterity modfier.

Fire At Will (Ex): Beginning at 13th level, the archer can use his Hold ability as a standard action, but it must be the last action on his turn.

Rapid Fire (Ex): Beginning at 13th level, the archer can make a full attack action and a move action in the same round. He takes a -2 penalty to his attack rolls for that round, and cannot apply his Precision ability.

Stand Firm (Ex): Beginning at 17th level, the archer can use his bow without provoking attacks of opportunity, and he threatens every square within 15 feet of him, provided he is using a ranged weapon.

Heroic Rapid Fire (Ex): From 19th level onwards, the archer can make an a full attack action and a move action in the same round without any penalties, and he can apply his Precision ability, provided he is using a ranged weapon.

Strike Arrow (Ex): At 20th level, an archer can shoot anything that he has shot before. Whenever a target his hit by a ranged attack from the archer, any attacks that he makes against it for the next 5 rounds are automatically critical hits.