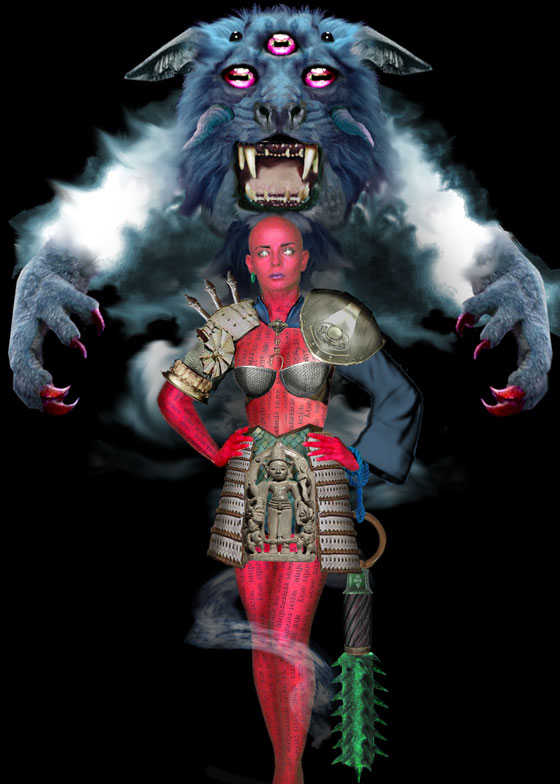 This goddess of vengeance takes the form of a bald-headed maiden. She has red skin covered in tattoos. Her eyes seem to pierce into people's souls. Her short stature and a lean build belie her tremendous strength. She is usually portrayed as wearing a weird suit of armor and carrying the sword-breaker. She can also take the form of a hideous monster.

She is symbol of furious vengeance and is also known as the Godslayer. Legend has it she has fought and destroyed many lesser gods.

Chamiee embodies the need to exact retribution by those that have been wronged. It is important that once she is invoked those seeking vengeance must actively take steps to exact their revenge. They need not take up arms themselves, but they must orchestrate the proceedings - revenge is a personal thing. The scale of the revenge should be relatively even, an "eye-for-an-eye" though some of her followers have a reputation for heavy-handedness. Chamiee does not take kindly to being invoked over petty squabbles.

Chamiee is not a Deity often worshipped outright, though her spirit is often called on by those seeking vengeance and given thanks by those that have received it. Those offering prayer must raise their own alter to make offerings and pledges.

Clerics of Chamiee have a strong revulsion to injustice and if they not already part of a justice system, they will often turn to vigilantism. In most instances those venerating the goddess will hide their devotion. Those that do count as a cleric of Chamiee nearly always have levels in another class, particularly fighter classes.