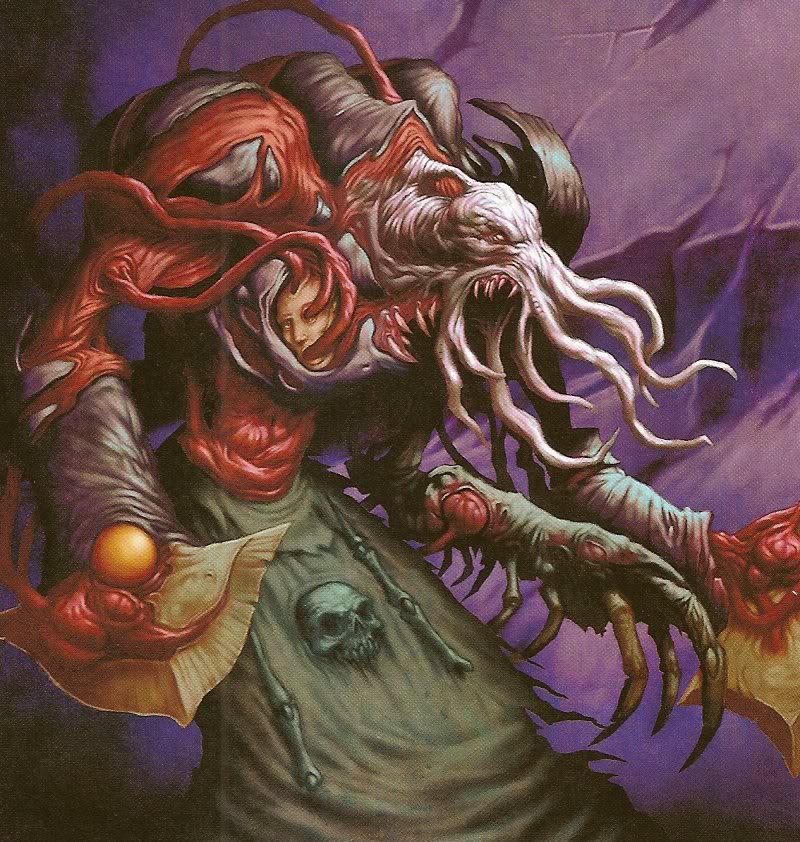 Even the illithids fear this hunter, who makes no distinction between the brains of the lesser races and illithids themselves. All must be eaten to maintain its insatiable hunger.

Illithids who feed on their own soon become poisoned by their own ichor. The result is madness, and over time, changes in the body. Growing stronger and warped, their face vanishes, overtaken by their giant mouth, and their limbs elongate and warp. Spikes of bone ripple out from it's back, and it is driven by bloodlust and hunger. Insane as they are, they are still intelligent and in rare moments where they can plan, they do so with brutal efficiency. Cepholathes are unusually cruel and sadistic, seeming to enjoy the act of torment. Cepholathes speak Undercommon and six other languages, but they hardly ever talk due to their madness.

Cepholathes prefer surprise and ambush. Though they are not capable of their mind blast ability as an illithid, they use other abilities to confuse and grapple enemies, then drag them away, often to a trap, net or other place where they can be dealt with. Traps are a large part of their plans, usually traps which remove one from a group to render them helpless. In the rare event that two cepholathes team up (rare, as madness often makes them incomprehensible to each other), they can and do plan with clever tactics in mind.

For all other purposes, such as skills and saves, use Intelligence minus Insanity in place of Intelligence. For the purpose of saves, it negatively affects Will saves as if it was based on Wisdom, like the cleric domain.

Once per day, the character can see and act with the clarity of true madness. Use the character’s Insanity score as a positive rather than a negative modifier on a single roll involving Intelligence. Choose to use this power before the roll is made.

Chaos Mind (Su): Instead of mind blast, cepholathes gain a spell like ability to cause confusion as per the spell within a 20 ft. radius of the caster, 1/day (DC 29) as a 7th level caster. Treat it as a 6th level spell.

Improved Grab (Ex): To use this ability, a cepholathe must hit with a tentacle attack. It can then attempt to start a grapple as a free action without provoking an attack of opportunity. It can use this on opponents up to its size category.

Facehugger (Ex): When a successful grapple with its tentacles has been made against an opponent, the subject takes 1d4+6 acid damage per round they are held. If by the end of three rounds the grapple has not been broken, the cepholathe has successfully drilled through the face and reached the brain, killing them instantly.

Extend Limbs (Ex): At will, the arms of the cepholathe can stretch, granting an extra 5 ft. beyond their normal range. The extra range is not obvious until the cepholathe attacks.

Stolen Skill Points (Ex) The cepholathe shown here has eaten its full fifteen brains' worth, and as such has an extra +30 skill points, a +4 bonus to Intimidate checks, and a +16 bonus to Concentration checks.