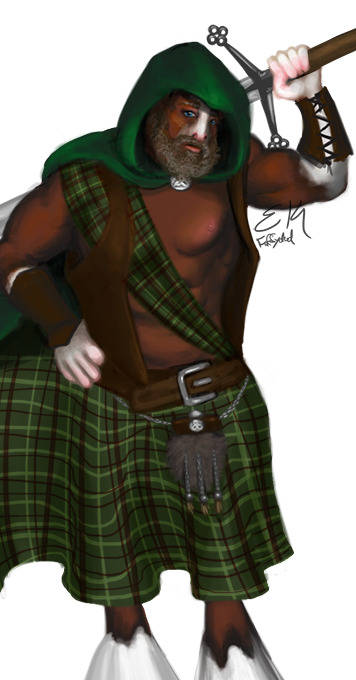 Draught centaurs are huge and strong, standing 9 feet tall and weighing an average of 2,100 pounds. Their faces have a slightly equine shape and they have pointed, rotatable ears. They have a fur coat and feathering on their legs. They wear loose, layered clothing made of rough fabrics. Most clans have a tartan, and noble families have a crest.

The god of centaurs is known as Skerrit the Forester. He is a Neutral deity with Chaotic Good tendencies. His symbol is an oak growing from an acorn. Skerrit is also worshipped by satyrs and sylvan elves who are neutral in alignment.

Draught centaurs have a given forename and a family surname. If one is part of a clan, they will use either a clan surname or their family surname, whichever is more prestigious.