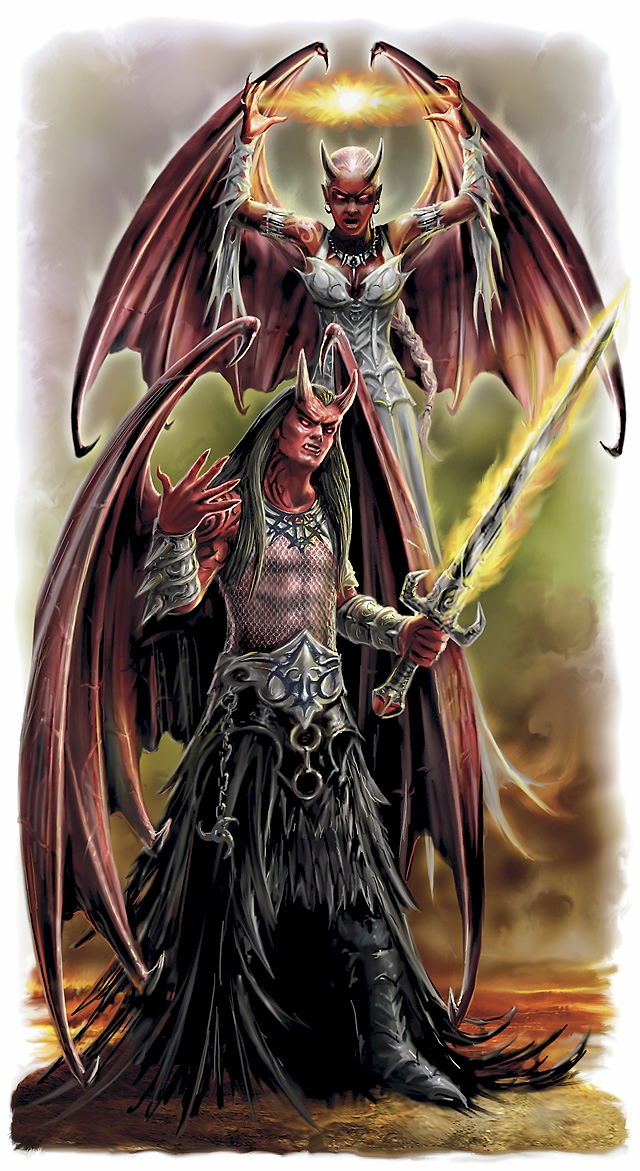 As the war between Arkhosia and Bal Turath reached its peak some of the tiefling lords of Bal Turath called upon their infernal allies to aid them in their struggle. A few found their cries answered in a very personal way. Several devils came to the “aid” of their transformed allies by offering to bring them closer to the powers of the Nine Hells by mating with them (or their wives) and birthing a being more powerful then either tiefling or dragonborn.

This was how the first cambions came into existence. Many of these creatures become powerful warriors and magic-users within the empire, but their vast cruelty and lust for power quickly earned them enemies among those that had first sought out their creation. Even as these creatures gained power and helped advance Bal Turath in the war, they tortured and deceived friend and foe alike slowly attempting to subjugate the empire and seize it for themselves.

Soon the lords of Bal Turath could tolerate no more, and they moved against their offspring. In an evening known as “The Righteous Purge” many cambions were struck down without warning by assassins. Others were hunted down in the following weeks as they fled, and a very few managed to escape and go into hiding.

Cambions are infernal looking humanoids with deep black hair, although some are born hairless. They have dark crimson colored skin, with some deepening to shades of coal black, and eyes that glow with a reddish fire. Cambions sport both a set of horns and a large pair of black leathery bat-like wings. Their mouths are filled with sharp incisors and canines for eating meat. Being entirely carnivorous, they become physically sick if they eat any food other then meat. As a result, their bodies exude a ripe, predatory stench. While cambions are immortal they age just like a standard human until they reach the age of 20, at that point they cease aging. Although with their lifestyles and the general hostility others show toward them they seldom survive more then 1 or 2 centuries.

Cambions are the offspring of devils and depraved or unwilling mortals. Most cambions revel and excel in the art of deception, finding no small pleasure in tricking someone into doing something they would normally never think of doing. Many times female cambions are called "Alu-fiends", although regardless of the name others call them they have the same traits and abilities as their male counterparts. Cambions will sometimes pose as tieflings or other creatures, keeping their true heritage a secret. PC Cambions tend to be more controlled then then most of their species; keeping their darker desires under a modicum of control, although they still have a tendency to be self-centered and a want to prove themselves as superior to others (even their "friends").

Dark and brooding, cambions live as outcasts or devilish servants. They have a strong desire to prove to all that they are superior and worthy of respect and power. They can be found in either civilized locales or dark remote dungeons. In both places they tend to be reclusive, although many evil cambions enslave lesser beings to toil for them.

Cambions that exist in the current times have several different origins; some of the cambions that escaped managed to mate with humans, tieflings, or even other cambions, others are born from mortals that have been unwillingly defiled by a devil, still others actually willingly give themselves to infernal creatures in hopes of obtaining greater power (or as the result of a twisted mental disorder), and even others are born because of tainted blood in their families past.

There are always stories of hapless mortals who find themselves at the mercy of an infernal creature, some are adventurers who fall prey to devils while traveling to the Nine Hells, and others are the victims of unholy rights or foul curses. Those that find themselves debauched by these evil creatures may sire or give birth to cambion offspring. These offspring have various fates; those birthed in the Nine Hells are raised by their infernal parents to serve them as loyal generals (although other infernal creatures despise and distrust these “half breeds”, they obey them out of fear of the cambion’s devilish parent), those that spring from the unholy rights of a cult are raised by the cult to further their dark goals. The few unlucky souls that find themselves drawing the attention of dark forces either by their own actions or by the pleading of another, and find themselves bearing a cambion child, may discard the child or seek to raise them in secret depending on the mortal parents initial reaction to the birth. If they sire a child the infernal parent will raise the cambion in hell as a slave, forcing them to live in fear from both their parent and the other native beings.

Both infernal cultists and the extremely mentally disturbed have been known to summon creatures from the Nine Hells, and sometimes the summoners will give themselves to these creatures for whatever purpose. If a cambion is created by this union it is raised by its mother. Those raised in hell are often trained to return to the Prime Material to carry out some twisted plot created by their infernal parent. The others that are raised on the Prime Material are reared to obtain a position of power, either as leader of a cult or some other organization. These cambions are often insanely revered by their families.

As cambions are almost as lustful as they are controlling, some tiefling and human bloodlines have been tainted at some point by past unions between a cambion and one of their ancestors. Because of this very rarely a cambion will be born to human or tiefling parents. Most humans see this some form of curse or punishment from the gods (unless they are aware of their nefarious lineage), while tiefling parents can be very accepting of their children. These few cambions are raised very much like every other member of their parent’s race. The path they follow is influenced by how both their parents and the community treat them, although they are still driven by a need to prove to everyone how they are superior to others. There have even been instances where the cambion bloodline manifests as secondary characteristics in their descendants (Devilish Lineage). These “demicambions” will have various cambion physical characteristics, although they are smaller and muted, often almost looking cute. Many even have small vestigial wings. Those that have a devilish lineage tend to be a bit mischievous and often have a healthy sexual appetite.

<!-Description. Why does the race adventurer and what do they stand to gain from it?->

<!-Favored Class 1->: <!-Description. What are the race's adventurers of this class like? Why should a character choose this class?->

<!-Favored Class 2->: <!-Description. What are the race's adventurers of this class like? Why should a character choose this class?->

<!-Favored Class 3->: <!-Description. What are the race's adventurers of this class like? Why should a character choose this class?->

Caliban is a cambion rogue. Abandoned at birth by his mother, he was raised by a group of sewer dwelling thieves who took pity on him. His young life was unhappy, as those who saw him saw only a monster, and even his adopted family could be mean and unforgiving. Now as an adult he finds himself convinced that regardless of his past, he is bound for some great destiny. Leaving the streets behind he has found a group of adventurers that he knows will help carry him on to his greatness. Even if they don't know they are doing it.

Aliiszor is a cambion warlock who at an early age felt the call of his infernal heritage. Drawing upon those ties he forged his infernal pact with the dark forces in an attempt to overcome his true nature and actually do some good for the world. He joined a group of adventurers who see the want to do right in him, and he hopes to be able to live up to those expectations and become a real hero.

Kaanyr is a cambion warlord. Raised in a small city by his mentally unsound mother, he joined the militia as soon as he could. Although disliked and untrusted by his peers he quickly proved himself in battle and enjoyed training beneath some of the cities best military minds. Still even those he called friends never seemed to truly trust him, so when he could he left the city and traveled to a small border town where beings of many races lived as a community. There he has joined a small adventuring company that appears to not only trust him, but seem to look to him for guidance. It is with these people he knows he will rise to greatness and gain a kingdom for himself.

When creating a cambion adventurer, here are a few points to consider.

When using cambion NPCs they should have fly 8 as a standard form of movement. They do not require the Cambion Flight feat.

Cambions are Male only

The following feats are exclusive to the cambion race.

When your cambion character gains a class utility power after 1st level, you can forgo taking a power granted to you by your class. Instead you gain a cambion utility power of the same level or lower.