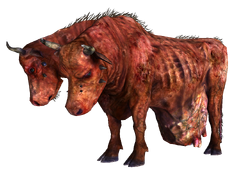 "Swear I heard one of them brahmin speak. 'Moo, I say,' or somesuch."

It would seem the radiation has tried to force the brahmin into two separate organisms. As a result of the constant radiation, these formerly normal cows have sprouted a second, independent head. Ironically, when brahmin are born with a single head, they are considered mutated. Brahmin also have eight stomachs. It is also known that brahmin also have four testicles. Their skin has turned a toasty, dusty rust color from the fallout exposure and their horns have in turn become a dirty brown. Their udders have also grown abnormally large (almost dragging on the ground).

Trample(Ex): When they attack they run and ram into foes, swinging their horns into the body of the threat. Although their hide is thick, bullets will still penetrate and kill them rather quickly. As a full-round action, a creature with the trample ability can attempt to overrun any creature that is at least one size category Smaller than itself. This works just like the overrun combat maneuver, but the trampling creature does not need to make a check, it merely has to move over opponents in its path. Targets of a trample take an amount of damage equal to the trampling creature’s slam damage + 1-1/2 times its Str modifier. Targets of a trample can make an attack of opportunity, but at a –4 penalty. If targets forgo an attack of opportunity, they can attempt to avoid the trampling creature and receive a Reflex save to take half damage. The save DC against a creature’s trample attack is 10 + 1/2 the creature’s HD + the creature’s Str modifier (the exact DC is given in the creature’s descriptive text). A trampling creature can only deal trampling damage to each target once per round, no matter how many times its movement takes it over a target creature.

Stampede(Ex): A stampede occurs if three or more creatures with stampede make a trample attack while remaining adjacent to each other. While stampeding, the creatures can trample foes of their size or smaller, and the trample's save DC increases by +2