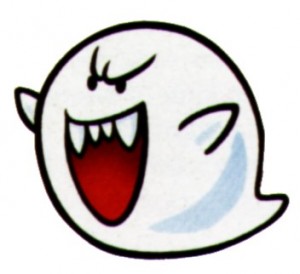 Boos are a type of white spherical ghost with menacing and normally open mouths. They are known for their large tongues and small "arms" of some sort. However, the most distinctive characteristic of the Boos is their shy personality, where they cover their faces when someone looks them directly in the face. They will uncover their faces once the subject turns around.

Racial Traits: +2 Dex, -2 Con; Medium, 30 ft, Float - Boos do not have to touch the ground, though they cannot fly and still remain tethered to the earth by gravity. Boos take no damage from falling, and are unaffected by ground-based impediments like difficult terrain and caltrops; immune to criticals; can cast ghost sounds as a spell-like ability; Boos are great at frightening people but it comes at the cost of being poor in social situations, +4 to Intimidate, -2 to Persuasion; starting language common and ghost.

Abilities: The most important ability for a Boo is their Dex. A good Dex is crucial to a Boo being extra sneaky.

Alignment: Boos are rarely good and are most often neutral. Many perceive Boos' prankster nature as evil but mostly they just love to have a good laugh.

Weapon Proficiency: Boos are proficient with simple and martial weapons.

Class Defense: Boos have a B column Defense bonus.

Sneak Attack: If a Boo can catch an opponent when he is unable to defend himself effectively from her attack, she can strike a vital spot for extra damage.

Ranged attacks can count as sneak attacks only if the target is within 30 feet.

A Boo can sneak attack only living creatures with discernible anatomies—undead, constructs, oozes, plants, and incorporeal creatures lack vital areas to attack. Any creature that is immune to critical hits is not vulnerable to sneak attacks. The Boo must be able to see the target well enough to pick out a vital spot and must be able to reach such a spot. A Boo cannot sneak attack while striking a creature with concealment or striking the limbs of a creature whose vitals are beyond reach.

Evasion (Ex): At 2nd level and higher, a Boo can avoid even magical and unusual attacks with great agility. If she makes a successful Reflex saving throw against an attack that normally deals half damage on a successful save, she instead takes no damage. A helpless Boo does not gain the benefit of evasion.

Invisibility: At 3rd level a Boo can become invisible that lasts 5 mins the number of times a day equal to its Int Mod. This is boosted to greater invisibility and lasts 10 mins at level 12.

Fear Attack: On a successful sneak attack, target must make a Will save or become shaken (DC = 10 + Boo's level + Boo's Int mod). This effect becomes frightened at level 8 and panicked at level 12.

Improved Uncanny Dodge (Ex): A Boo of 8th level or higher can no longer be flanked.

Teleport: Boos can Teleport 1/day. This becomes a Greater Teleport at lvl 18.

Phase Door: Boos at level 14 can act as if Phase Door has been case number of times per day equal to their Int mod.

Bonus Feat: A Boo can acquire a Bonus Feat instead of learning a new special ability.

Disarming Attack: When making an attack, a Boo can try to knock a weapon out of an enemies hands. If the attack hits, target must make a successful Str save (DC = 10 + Boo level + Boo's Int Mod) or drops a weapon of the Boo's choice.

Evasive Footwork: Roll a d6 and add to AC. This lasts # of rounds = Dex Mod. Boos can't provoke attacks of opportunity when this is in affect.

Fast Reflexes: Boos can attempt to dodge the brunt of an attack when using this ability. Boo makes a reflex save and if equal to or greater than enemies attack throw then Boo only takes half the damage.

Fear Attack: On a successful sneak attack, target must make a Will save or become shaken (DC = 10 + Boo's level + Boo's Int mod). This effect becomes frightened at level 8 and panicked at level 12.

Precise Strike: Boo attacks with pinpoint precision at a target's weak point. This ability gives the next attack automatically a chance for critical damage. Does not affect target's immune to criticals.

Skill Mastery: Boos are such skillful creatures that when they use this ability they can take an automatic 10 instead of rolling on a skill check. This applies even in adverse situations.

Slippery Mind: Any mental impairment or mind control on a Boo can be shaken off with the use of this ability.

Stunning Strike: On a successful sneak attack, target is stunned and loses its next turn.

Trip Attack: A Boo can attempt to knock an enemy prone with an attack. Upon hitting the enemy, the enemy must make a Reflex save (DC = 10 + Boo level + Int Mod) or fall down prone. The DC is affected by the size of the creature in comparison to the Boo as well.