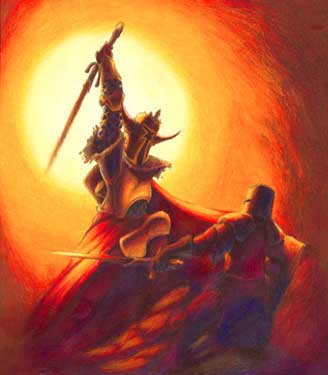 The blackstone knight is very similar to the hellfire knight; both give up hit points to channel fiendish energy through their bodies, entering a state in which they gain great power for short periods. Where the hellfire knight manifests his powers as hellfire, however, the blackstone knight undergoes a transformation that turns his body into an amalgam of flesh, rock and metal.

Extremely adept in the use of oversized weapons, a blackstone knight wades into the thick of battle, heavily armed and armored, and unleashes his catastrophic wrath upon his opponents.

Due to their lack of access to shields and the nature of their abilities, heavy armor is almost essential for a blackstone knight's survival.

Abilities: Strength is the blackstone knight's forte, as well as Constitution, for both of these increase his survivability. Charisma is his most important ability, however, for it affects the DC's of his abilities.

Races: Like that of the hellfire knight, the path of the blackstone knight is often sought by those who seek raw power regardless of the consequences. The power of fiends is extremely dangerous, but many humans are willing to bet on the risk in search of the reward. Other races, particularly those that favor some form of fiendish cult, also create blackstone knights.

Alignment: Any non-good. A good aligned character makes an unsuitable conduit for the evil power of the Lower Planes.

All of the following are class features of the blackstone knight.

Power of the Body (Ex): A blackstone knight is extremely hardy, able to withstand a great deal of punishment before going down. He gains maximum hit points for every level of blackstone knight that he takes. This does not apply to any levels from any other classes or racial Hit Die.

Bigger is Better: A blackstone knight specializes in the use of the largest weapon possible. He gains Monkey Grip (Complete Warrior) as a bonus feat at 1st level, but its effects only allow him to use a larger than normal weapon in two hands. For example, a blackstone knight can wield a Huge greatsword in two hands, but cannot use a Large greatsword in one hand if his size does not normally allow him to do so.

Mighty Swing: A blackstone knight gains the Power Attack as a bonus feat at 3rd level, even if he does not meet the prerequisites. Not only can the blackstone knight reduce his base attack bonus, but he can also sacrifice his Armor Class to add even more damage to his attacks. The ratio for sacrificing Armor Class is the same as using his base attack bonus.

Damage Reduction: Whatever doesn’t kill you only makes you stronger. The blackstone knight gains damage reduction 1/- at third level, and this value increases by 1 every four levels up to 5/-.

Demonic Growth: At fourth level, a blackstone knight in a demonic rush can sacrifice 1d4 additional hit points to replicate the effects of an enlarge person spell for the duration of the current demonic rush. All of the normal procedures for the spell are followed, but this ability cannot be countered by reduce person or made permanent.

Brimstone Body (Sp): At the cost of 1d6 hit points, a 7th level blackstone knight can cover his body in a tough, red/black abyssal rock, granting him the effects of a stoneskin spell either until it absorbs the maximum amount of damage or for the duration of his current demonic rush.

Dire Swing: A blackstone knight is an expert at wielding a weapon with power by eighth level. He now gains a +3 bonus to damage for every 2 points of base attack bonus or Armor Class he gives up.

Plutonic Pillar (Su): The blackstone knight gains a potent offensive weapon at 9th level, when he gains the ability to call a powerful adamantine spike from below ground during a demonic rush at the cost of 1d8 hit points. This column can attack any foe in contact with the ground within a radius of 10 feet per blackstone knight level, dealing 1d4 points of bludgeoning damage per level. The use of this ability is a standard action.

Second Skin: At 10th level, the blackstone knight has become so accustomed to wearing heavy armor that even his suit’s weight is inconsequential to him. He no longer takes a penalty to his movement speed when wearing armor, and can run using his normal multiplier. Other armor penalties (such as armor check penalties) still apply.

Plutonic Prison (Sp): At 13th level, the blackstone knight may encase an opponent in stone for 3d4 of his own hit points, replicating the flesh to stone spell. The knight has no capability of reversing this effect.

Stygian Steel (Su): At 16th level, the blackstone knight can cover his body in solid metal (like the iron body spell) for self-defense. When he uses this ability, he takes 2d4 damage per round he maintains the transformation. This effect immediately ends when he stops his current demonic rush, but may be resumed freely during another rush.

Nilfheim (Su): The blackstone knight can make the rock and metal around his body burst forth in an explosion of destructive force. At 18th level, a knight in a demonic rush may give up 4d4 hit points to deal 1d6 points of damage per level (maximum 20d6) to everything in a 50-foot radius around him. If the blackstone knight uses Nilfheim, his current demonic rush immediately ends, and he cannot use his demonic rush again for 24 hours. He is also treated as exhausted until he rests for 8 full hours.

Harbinger (Ex): At 20th level, the blackstone knight’s power to channel fiendish energy reaches its pinnacle. He may now use either of the plutonic abilities outside of his demonic rush. For the purposes of wielding weapons and wearing armour the Blackstone Knight can be treated as one size category than he actually is. He gains the outsider type (with the native subtype).

If a blackstone knight becomes of good alignment, he cannot channel the fiendish energies that grant him strength. He loses the ability to use his demonic rush and all associated abilities. These abilities are restored to him as soon as he reverts to a non-good alignment.

Demonic Rush: An epic level blackstone knight continues to gain daily rounds for his demonic rush, allowing him to use it for longer periods of time. He also gains an additional +2 bonus to Strength during a demonic rush every three levels.

Bonus Feats: The epic blackstone knight gains a bonus feat (selected from the list of epic hellfire knight bonus feats) at 21st level and every three levels after.

Religion: As the carriers of unearthly demonic powers, blackstone knights are often (and sometimes unwillingly) tied with cults of such entities. It is rare that they venerate or even associate themselves with good dieties, but it is not unheard of.

Other Classes: Blackstone knights associate with others much like hellfire knights; due to the self-damaging nature of their abilities, they highly value clerics or any similar class with healing abilities who can keep them alive and away from their damnation for as long as possible. But the defensive and enigmatic nature of a blackstone knight is not reflected in his hellfire knight kindred, and as a result they get along with others even more poorly. A rare partnership is a blackstone knight traveling with a hellfire knight; this is not out of a particular lack of desire, but rather because of the extreme rarity of both classes. When these pairings are formed, however, the result is usually a very formidable combat tandem. On the other hand, clashes between two knights of different alignment is not unheard of, and when the combatants are powerful their duels can last for hours, razing the landscape for miles around.

Combat: With his powerful defensive capabilities and aptitude for large melee weapons, the blackstone knight makes a powerful front-line combatant even without hyis demonic rush. When he channels the power at his disposal, he becomes a powerful bastion of defense that can withstand all comers.

Advancement: Just as the hellfire knights worship Mephistopheles (or some other hellfire-related entity), blackstone knights worship a figure that greatly reflects their own abilities: the Iron Lord Dispater. Blackstone knights of an evil alignment often become disciples of said devil lord, while others still usually revere gods of war, reveling in bloodshed.

Blackstone Knights in the World[edit]

Due to their high level of combat effectiveness without the use of their fiendish abilties, most blackstone knights can pass as fighters to the unwitting observer. Anyone with the ability to detect evil or magic, however, will find that there is much more to them than meets the eye.

Daily Life: The nomadic life of a sellsword is well suited to a blackstone knight, who prefers to never stay in one place for too long. They never accept permanent deals and leave whenever they feel they have attracted too much attention to maintain the concealment of their powers.

Notables: Tartaros is an old and powerful blackstone knight (BsK 22) as well as the comrade of the hellfire knight Azazel. Despite his graying hair, his body is still that of a man is his prime, and the speed in which he moves when dressed in full plate armor astounds many of his opponents.

Organizations: There is never a formal organization of the blackstone knights, as a large congregation would attract the attention of fanatical demon-killers who would jump at the opportunity to kill an alleged "half-fiend".

NPC Reactions: Fear and awe follow the reticent and armored blackstone knights wherever they roam. Imposing even at first glance, a blackstone knight usually fails in all attempts to blend in.

Characters with ranks in Knowledge (the planes) can research blackstone knights to learn more about them. When a character makes a skill check, read or paraphrase the following, including information from lower DCs.

Blackstone Knights in the Game[edit]

Blackstone knights appear to be fighters to the untrained eye; to further this deception may try to behave in the same manner as their fighter counterparts. Most blackstone knights are swords-for-hire, and can be found wherever some grisly work needs to be done.

Adaptation: Almost every campaign setting has some form of the Lower Planes. Blackstone knights channel the powers of the infernal beings who reside there into their own bodies.

Sample Encounter: A 9th level chaotic neutral blackstone knight travels with a band of bloodthirsty mercenaries. He cares nothing for his comrades' lives and will not use his full power until they are all dead or he is at serious risk of being slain.