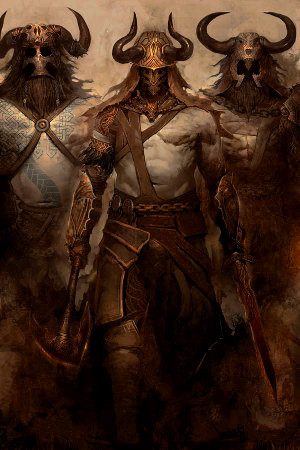 Intimidating lawful warriors who seek to crush all opposition through force and destruction. They always wear terrifying plate armor crafted to resemble horned beasts. They are exceptionally difficult to kill in a fair fight. They specialize in demoralizing opponents and wielding two large weapons during combat. They prefer an Evil alignment but there are a few Good aligned Lord's. These special few seek to protect the strong rather than oppress the weak.

Black Crystal Lord's are devastating shock-troopers. They protect the party by engaging and crushing opponents at close-range.

Alignment: Generally Lawful Neutral or Evil though Black Crystal Lords of other alignments do exist.

All of the following are class features of the Black Crystal Lord.

Nations Burden (Ex): At 1st level you receive your Constitution modifier to Armor Class as a natural armor bonus and each level double the Constitution of the hp each level. This bonus can exceed your level in this class and stacks with other sources of natural armor.

Imposing Presence (Ex): At 1st level the Black Crystal Lord gains the ability to add their Constitution to their Intimidate skill in addition to their charisma.

Armor Scarred (Ex): At 2nd level you reduce the armor check penalties for armor worn by ½ your Black Crystal Lord level rounded up.

Rampaging Charge (Ex): At 3rd level the Black Crystal Lord receives an additional bonus to hit and to damage when charging equal to his ½ his level rounded up. This stacks with the normal +2 to attack rolls after a charge. Additionally whenever you charge you may make a full attack in return for being left flat-footed after the attack in addition to the normal penalties.

Warrior Pride (Ex): At 4th level you gain a +2 to your Constitution score. This bonus increases by an additional +2 every 4 levels.

Judgment (Ex): At 4th level, once an encounter-per level of Black Crystal Lord, you may take a special free action. Make an Intimidate check (DC 10+1/2 character level+charisma modifier). If successful you may add your Constitution modifier to hit & damage toward any attacks taken this round. Check failure means you must wait 2 rounds to attempt another use. This ability may only be used once per round.

Two-Weapon Crush (Ex): At 5th level you may wield two, Two-handed Weapons. You gain one extra attack per round. When armed this way your primary and off-hand attacks have +5 bonus.

Armored Giant (Ex): At 9th level you can move at your base speed in heavy armor or when carrying a medium or heavy load. In addition the Black Crystal Lord is no longer left flat-footed upon full attacking after a charge.

Improved Two-Weapon Crush (Ex): At 10th level when wielding two, Two-handed Weapons, your primary and off-hand attacks have a +5 bonus. Also in addition to the standard single extra attack you get with an off-hand weapon, you get a second attack with it, will have a +8 bonus

Intimidate Mob (Ex): At 11th level, once an encounter, you can make a special full round action. The Black Crystal Lord must make an Intimidate check; all opponents within 30 feet must then make a will save with the DC equal to the Intimidate check’s result. If an opponent fails the save they become frightened for 1d4 rounds those who succeed on the save become shaken for 1 round, if an opponent rolls a natural 1 on their save they instead become panicked for 1d4+2 rounds.

King's Quickening (Ex): At 14th level, once a day, you can make a special full round action. Make an Intimidate check (DC 10 + 1/2 Character Level + Charisma Modifier.) If successful you can make 3 attacks against all adjacent opponents at your highest base attack bonus. All attacks are made with the same weapon. Check failure means your turn is over but the ability is not used up.

Greater Two-Weapon Crush (Ex): At 15th level when wielding two, Two-handed Weapons, your primary and off-hand attacks will have a +10 bonus. Also in addition you receive a third attack with your off-hand weapon, will have a +10 bbonus.

Nations Expand (Ex): At 19th level you move and attack as if under the influence of the Freedom of Movement spell.

Any Black Crystal Lord who multiclasses or become nonlawful trades the Nations Burden ability for the Dodge feat. They keep all other benefits of the class.

Nations Pride: At 24th and 28th level you receive a +2 to you Constitution score. 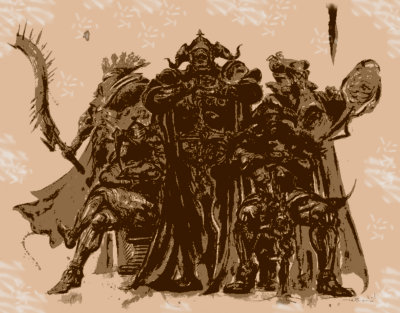 An artist's painting found in the Book of Liam's Fire. It is widely believed that these warriors where Black Crystal Knights.

Other Classes: Treats other classes poorly.

Combat: Defender. Seek to use Judgment in conjunction with King's Quickening for massive damage to adjacent opponents. Can use two, Two-Handed Weapons for a -4 penalty at 11th level.

Black Crystal Lord's in the World[edit]