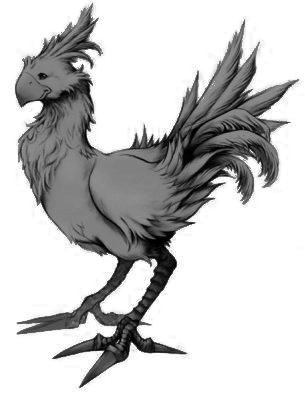 A large black fowl preens in the grass, standing about eight or nine feet tall. Several others of its kind are around it, eating greens and nuts. Its long hard-scaled, three-toed legs make up a good portion of its height, the rest is feathery torso, wings, neck and head. It is almost entirely black, from its eyes to its tail feathers; even its scaly legs and hard, sharp beak are tinted black.

Flapping its wings furiously to work the muscles around its stomach and esophagus, a black chocobo can belch a large, viscous glob of stomach acid, dealing acid damage to the target of its ranged touch attack. This is a full attack action that provokes attacks of opportunity. This attack deals 2d8 plus half the chocobo's HD in acid damage on a successful hit. A black chocobo is unharmed by its own Choco Acid. This attack is treated as an exceptinal ranged weapon and has a range increment of 10 ft.

Flapping its wings furiously to work the muscles around its stomach and esophagus, a black chocobo can belch a super-cooled piece of ice, dealing cold damage to the target of its ranged touch attack. This is a full attack action that provokes attacks of opportunity. This attack deals 2d8 plus half the chocobo's HD in cold damage on a successful hit. A black chocobo is unharmed by its own Choco Frost. This attack is treated as an exceptional ranged weapon and has a range increment of 10 ft.

A chocobo is treated as having the Run feat. Chocobo's strong, tough legs, and gripping, scaled feet are perfect for traveling. A chocobo can travel without penalty over any solid, non-damaging surface without needing to make a balance or tumble check. Also, a Chocobo can sprint for short periods of time. It may move at twice its base land speed for one round every five minutes. This stacks with the effect of the Run feat, allowing a chocobo to move 480 feet in a single round.

A chocobo cannot fly, WHEN INSIDE COMBAT, despite its wings. They serve only to assist in balance while running and support while jumping.

Black chocobo have the astounding ability to run circles around mountains, scaling and crossing mountains and mountain ranges in anywhere from mere hours to a day or two. Instead of making a climb check, a running chocobo may simply run up most surface that would need to be climbed otherwise. Their feet have become powerful at gripping jagged rocks and gravel. They may only climb upward a vertical distance of 50 ft. with each move action, and they must begin and end each move action on a flat surface.

Black chocobo have the amazing ability to run over shallow bodies of water, including rivers, lakes, and water just off the shore. This is due to the adaptation of their bones to become spongy and hollow, while their skin, feathers, and hard legs and beak still protect their body just as well from attacks. Unfortunately, a black chocobo can only run over shallow water, not stand on it; the chocobo must remain moving to not sink.

Shallow water is any water with a depth of 10 ft. or less.