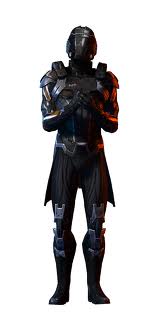 A Biotic Vanguard is a person who is born with the ability to manipulate the energy around all living things, they use this innate ability to devastating affect, teleporting across the battlefield to close in on enemies then boosting their own attacks to quickly kill their opponents.

Biotic Vanguard's are powerful melee combatants that use their biotics to close the distance between them and their foes.

Abilities: Strength is the most important ability for a Biotic Vanguard, it allows them to make devastating blows on their opponents, next is Wisdom as it improves their biotics, and finally Constitution for increased durability.

Races: Any race can become a Biotic Vanguard however Humans and to a lesser extent Half-Elves are more commonly born with the biotic potential, and while rare Half-Orcs make great Biotic Vanguard's.

Alignment: Any, though chaotic is very common.

All of the following are class features of the Biotic Vanguard.

Weapon and Armor Proficiency: A Biotic Vanguard is proficient in all simple and martial weapons as well as light and medium armor but not shields

Biotic Charge: At first level the Biotic Vanguard gains the ability to use a Biotic Charge which allows him to teleport 50ft in a straight line at an opponent ending in-front of the opponent. This deals 1d6 dmg unless the target passes a DC(12 + ½ level + wisdom modifier) Reflex save. The Biotic Vanguard can only do this once every 5 turns and its use cancels all other biotic abilities and none can be activated until 2 turns after the charge. A Biotic Vanguard can make a full attack after the charge but take no other actions.

Charge Synergy: At level two the Biotic Vanguard adds +1 to attack and damage rolls the round of and for one round after, a Biotic Charge. Every four levels this increases by +1.

Warp: At level five the Biotic Vanguard gains the ability to throw a ball of biotic energy at an opponent up to 60ft that must pass a Reflex Save (DC 12 + ½ Level + Wisdom Modifier) or take 1d4 + Wisdom modifier and receive a -1 to AC for three rounds. This cancels all other biotic abilities and must wait 1 round before activating any other biotic abilities.

Barrier: At level six the Biotic Vanguard gains the ability to increase his AC by 1, increasing by 1 every three levels. This ability cannot be activated after using warp or Biotic Charge for two rounds, and using either cancels barrier.

Biotic Charge Evolution: At thirteenth level the Biotic Vanguard's Charge evolves into one of two forms, the Area Charge, or the Heavy Charge.

The Biotic Vanguard is born with his powers and thus can never lose his class abilities.

Religion: Many Biotic Vanguard's worship Kord, but any god is fine.

Combat: The Biotic Vanguard fills the damage role in a party, charging in and killing foes, but at later levels can fulfill a ranged roll as well, though not as effectively.

Advancement: Multiclassing into a barbarian or fighter is likely the best option for a Biotic Vanguard.

Biotic Vanguards in the World[edit]

Biotic Vanguards are flashy and confident in their lifestyle of combat. Feeling themselves above the average members of their race they are sometimes given to pride and arrogance. Viewing themselves as a superior evolution of their species they always strive to obtain the heroes portion. For this, they are viewed with fear, disdain, and a general dislike by others.

Daily Life: Soldiering, Freelancing, or Mercenary work. They are valued for their natural combat prowess.

Notables: None. Their flashy displays are always remembered, their names are mostly unknown.

NPC Reactions: A general dislike of their superior traits and prideful manner.

Characters with ranks in Knowledge(History) can research Biotics to learn more about them. When a character makes a skill check, read or paraphrase the following, including information from lower DCs.

Biotic Vanguards in the Game[edit]

Biotic Vanguards are few and far between. Player Characters will often never interact with a Biotic Npc in their lifetimes. They are just too few to make an impression on society.

Sample Encounter: A group of elite soldiers confront the party. Within their ranks numbers a single Biotic Vanguard wearing light armor. The Biotic will attempt to deal with the party one at a time focusing on spike damage to a single individual after charging in to melee range.