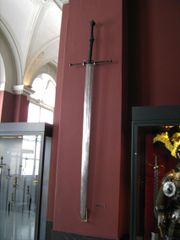 A bidenhänder is larger than a greatsword, and is too large to use without special training (the appropriate Exotic Weapon Proficiency feat which has an additional prerequisite of Str 13).

With DM's permission, his weapon may be considered as the revised 3.5 version of the fullblade found in Arms and Equipment Guide and Sword and Fist.