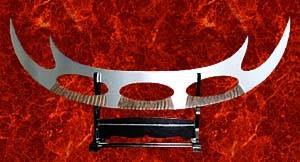 A bat'leth on a display table

An elegant and unusual weapon, the bow-shaped bat'leth deals damage with its cutting edge in the middle and the large piercing spikes. Experienced wielders can use the weapon with much more precision than unskilled ones, but it is a surprisingly easy, if different, weapon to use.

Characters with proficiency in martial weapons can use the bat'leth without the normal -4 to hit but they incur penalties. The critical range becomes 20/x3 and it no longer deals slashing damage. In addition instead of dealing strength-and-a-half they only deal their strength bonus in addition to the weapon damage.

Characters with proficiency in the bat'leth as an exotic weapon can use Weapon Finesse with it. Also they may forgo adding strength-and-a-half and only deal their strength bonus to provide +1 shield bonus for 1 round. The character need not attack that round to get the bonus but it must be declared.

While using Whirlwind Attack with a bat'leth it deals an additional 1d3 slashing damage to all affected creatures.