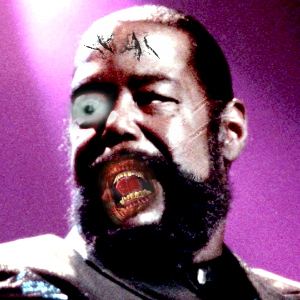 Often found in the ruins of theatres & other places of performance, the Barri Wight stalks females of any species, reducing them to quivering wrecks before ending their lives & consuming their still-warm flesh

A Barri Wight will usually observe a potential target for some time before attacking, often striking when camp is being set. If there are females present, it opens the combat by stealthily moving close enough that they are within range of its hypnotic voice ability & using Seductive Croon on all viable targets. If successful, the Barri Wight will force the females affected to assault any males and/or unaffected females in the party, while it remains on the sidelines. If the affected females successfully neutralise the rest of the party, they will then be summoned to the Barri Wight where it will use its Wisdom drain effect to kill them & then consume the corpses at it's leisure. If the ability fails, the Barri Wight will instead attack with Powerful Note, before either wading into melee range (if more than half the party are affected) or switching to Slow Dance & attempting to flee. If there are no females present, the Barri Wight will attack as though the "Seductive Croon" had failed.

Hypnotic Voice (Su): The Hypnotic Voice of a Barri Wight projects in a cone that has a range of 40' & can be used to cause the following 3 effects - Seductive Croon, Powerful Note or Slow Dance. The Barri Wight can maintain these effects for as long as it wishes, assuming it is concious & switching between them is a move-equivalent action that takes place instantaneously & does not provoke attacks of opportunity. All effects of Hypnotic Voice are ended if a silence spell or other similar effect is cast on the Barri Wight, or if it moves within the influence of such an effect, though the results of the effects can continue as stated in the specific effect descriptions below.

Seductive Croon: The Barri Wight opens it's mouth & lets forth a smooth, soulful song that causes males to be shaken (Will save at CR 17 negates) & females to be affected as though by a Command spell (effective caster level as the Barri Wights hit dice +1), except the effect only lasts for as long as the croon is maintained +D6 rounds. If the Barri Wight stops using Seductive Croon & then restarts while the results of the effect are still active, the target may make a new saving throw to negate the effect. The command given can be changed as a move-equivalent action, but doing so allows the target to make a saving throw to negate the effects every time this is done.

Powerful Note: The Barri Wight fills the ragged remains of its lungs & blasts out a mighty crescendo, causing D3 sonic damage per round to all targets within range (excluding the Barri Wight itself) & causing affected targets to be paralysed. The paralysis lasts for as long as the note is maintained +D3 rounds. Will save at CR 17 negates. If affected, a target may make a Will save (at CR 20) to shrug off the effects every round it takes more than 2HP of damage.

Slow Dance: The Barri Wight switches to a relaxing melody that causes all enemies within range to be affected as though by a Slow spell (caster level as the Barri Wights hit dice +1).

Wisdom Drain: When a Barri Wight makes a successful melee attack, it drains 1 point of Wisdom from the target in addition to its normal damage (Fort save at DC 17 negates). The save DC is Charisma-based. For each point of Wisdom drained, the Barri Wight gains 5 temporary hit points. The Wisdom drain effect remains until the target has had a full, restful night of sleep, at which it returns in full. A male target that is killed through having its Wisdom reduced to 0 in this manner has a 5% chance of rising 24 hours later as a new Barri Wight. This chance is increased by 5% for every level of Bard the character posseses, to a maximum of 95%.