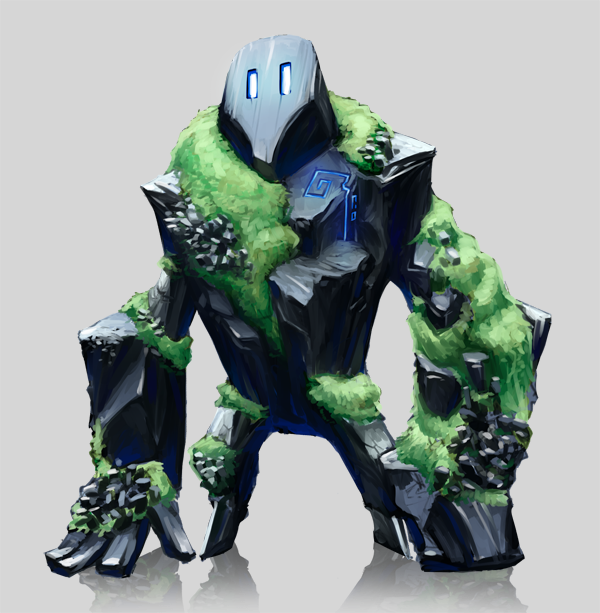 A titanic elemental composed of minerals from copper deposits, this hulking blue creature is used by powerful wizards to guard places or items of interest.

Just as the tomb's vault doors are about to open, a gigantic column of blue stone erupts from the flagstone below and throws the would-be thieves back. The column reaches high into the cavern, before coming back down to press against the floor of the large room... and lifts, revealing a pair of cerulean slits that glow with sentience. Within moments, a titan has pulled itself up to the surface, now standing on a pair of makeshift hind legs, towering over those who would attempt to breach its charge. Raising the azure forearm that had surprised the rogues just before, it swings sharply downward, beginning its assault.

Very similar to earth elementals of comparable size, Azure Guardians are elementals composed of minerals that form in deposits of copper, and are prized by wizards and other arcanists for their particular defensive properties.

Earth elementals are known for their particularly hardy nature, but as is the case with all extraplanar elementals, they are sometimes difficult to control or are unreliable. Azure Guardians, however, are seemingly prone to operating as defenders of designated locations or objects that they become imprinted upon, and can be cultivated on the material plane with sufficient care and knowledge. This, along with their notable defensive qualities and the ability to recover from damage independently and over time, has led to their use by many arcanists, holy orders, and even some mercantile groups as guardians of vaults, magic items, tombs, or even people.

Azure Guardians understand Terran, and no other language. They do not speak.

Hostile azure guardians typically use their immense size and power to pulverize or drive back their foes, but they often times do not pursue trespassers who retreat from their imprint unless ordered to or attacked from afar. Azure Guardians are typically dormant but aware (similar to an elf's trance), and can stay dormant indefinitely if undisturbed. This often leads to the titans being swallowed up by the elements over several centuries if not awakened. Because of this, many adventurers find themselves surprised as the creature emerges from the earth around them, or out of stone walls, after becoming aware of their presence.